↓ Skip to Main Content
Home › Anglican Communion › Who will the Primate be?

Who will the Primate be?

Peter Ould Posted on May 16, 2007 Posted in Anglican Communion 2 Comments 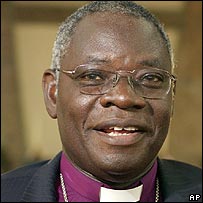 Given the below, the question is who the Primate giving alternate oversight will be? I’m guessing Peter Akinola of Nigeria. I’m not really a betting man but I think that’s a good speculative punt.

The angle to consider on this is the political message. For Fort Worth to go for an alternative primate is to prejudge the 30th of September compliance deadline. Given that they are effectively burning their bridges by doing this, why not go for a *major* display of pyrotechnics?

And remember, Bob Duncan is an anglo-catholic, but a large part of the ACN are Evangelical to greater or lesser extent. The election of Duncan therefore displayed an orthodox evangelical/anglo-catholic unity. Having Akinola as the Alternate Primate does exactly the same thing – it demonstrates that orthodoxy is the primary consideration, NOT specific churchmanship. It would also be, if I can be so crude, a tremendo

us one-finger salute to Schori and 815.

Having Akinola as Primate would be a massive development and would completely tip the balance of power. If the main Windsor Bishop players pick him as their Primate then the post-Tanzania mood that Akinola was a bit on the outside (as someone close to the ACO hinted to me last week) would be shown to be false.

So my money is on Akinola. I can’t say I definitely know for sure it will be him, but I do believe that Ft Worth et al want this to be as big as possible.

Edit 20:50 UK: But then I could be wrong. WannabeAnglican thinks it might be Venables.

2 Comments on “Who will the Primate be?”