Peter Ould Posted on October 29, 2007 Posted in Martyrs No Comments

Today (29th October) is the celebration of the martyrdom of James Hannington, the first Anglican Bishop of Uganda. Here’s what Frederick Quinn has to say: 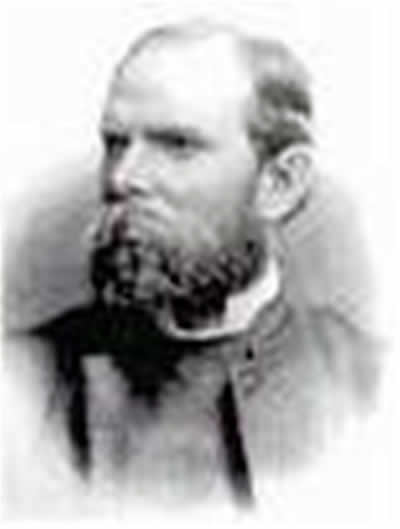 The nineteenth century was the century of missionary expansion. Fired by evangelical zeal to share the good news of God in Christ, missionaries pushed through African jungles and deserts, learned local languages, and braved pestilential climates to create schools, hospitals, and churches. Some were killed, others contracted debilitating diseases, but by the century’s end a global missionary presence was in place. The picture of missionary expansion was by no means a triumphal journey. Disease and martyrdom claimed great numbers. For example, James Hannington became bishop of Eastern Equatorial Africa in 1884 at age thirty-seven and began a tragic voyage toward Uganda. Shortly before arriving at the court of the suspicious kabaka (king), Mwanga, he and his party were seized by the ruler’s soldiers and jailed. Hannington wrote on July 22:

The outlook is gloomy…. Starvation, desertion, treachery, and a few other nightmares and furies hover over one’s head in ghostly forms, and yet in spite of it all, I feel in capital spirits. Let me beg every mite of spare prayer. You must uphold my hands, lest they fall. If this is the last chapter of earthly history, then the next will be the first page of the heavenly — no blots and smudges, no incoherence, but sweet converse in the presence of the Lamb.

He was held prisoner by a regional ruler near the Uganda border and wrote:

28th. 7th day. A terrible night; first with noisy, drunken guards, and secondly with vermin, which have found out my tent and swarm. I don’t think I got one hour’s sleep, and woke with fever fast developing. O Lord, do have mercy on me, and release me! I am quite broken down and brought low. Comforted by reading 27th Psalm. Fever developed very rapidly.., soon was delirious.

Evening. Fever passed away. Word came that Mwanga had sent three soldiers, but what news they bring they will not yet let me know. Much comforted by the 28th Psalm.

29th (8th day). I can hear no news, but was held up by the 30th Psalm, which came with great power. A hyena howled near me last night, smelling a sick man. I hope it is not to have me yet.

Soon the bishop and his fifty porters were led out and killed. Widespread persecution of Christians followed, many being killed or sold to Arab slavers. The Anglican Church, of which Hannington was a bishop, uses this prayer to commemorate his death:

Precious in your sight, 0 Lord, is the death of your saints, whose faithful witness, by your providence, has its great reward: We give you thanks for your martyrs James Hannington and his companions, who purchased with their blood a road to Uganda for the proclamation of the Gospel; and we pray that with them we also may obtain the crown of righteousness which is laid up for all who love the appearing of our Savior Jesus Christ; who lives and reigns with you and the Holy Spirit, one God, for ever and ever. Amen.