Yes, I’ve been a bit lax on this over Christmas and the New Year, but we’re back in the game today. 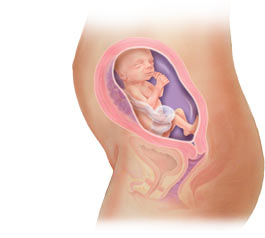 Your baby now weighs a little over one pound/ 500 grams and measures about 11.4 inches/ 29 centimetres from crown to heel. Her hearing is well established and she can make out a distorted version of your voice, the beating of your heart and your stomach rumblings. Loud noises often heard in utero, such as the barking of a dog next door or the roar of a vacuum cleaner, probably won’t bother your child when she hears them outside the womb.

Numerous studies seem to indicate that the unborn prefer classical music, especially Vivaldi. Play The Four Seasons for your child and pay attention to her movements. Does she quieten down during adagio sections and speed up for the allegro portions? You may have a budding conductor in your womb.

In addition to advances in your baby’s hearing, her lungs are developing to prepare for breathing. She’s swallowing but she normally won’t pass her first stool (called meconium) until after birth.

If your baby were to be born now, she would have a small chance of survival (about 16 per cent) with the right care. Every day in the womb makes a difference at this stage. If she was born at 24 weeks her chance of survival would rise to 44 per cent.