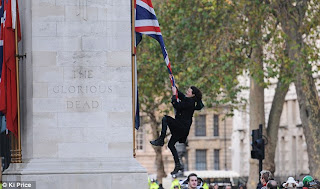 But it is quite another to desecrate the Cenotaph; the nationâ€™s memorial to The Glorious Dead; to those who died in order that these students might be free to speak their mind, to assemble with their colleagues and protest for their cause.

By tearing down the Union Flag and senselessly swinging like apes from this monument to the sacred memory of the sacrifice of millions, the primitive protestors have forfeited their right to be heard in civil society. The NUS must condemn this sacrilege; they must abhor the violent disorder; they must reject the anarchy of the minority and repudiate acts of vandalism and terrorism.

Protests are only effective when moral reason is maintained and national sympathies are aroused. They are won only when they satisfy the common, collective interests of the people as a whole. Those who desire fairness and justice must respect the rights of others for peace and the rule of law. The revolutionaries must tolerate the patriots: those who seek change must acknowledge those who desire to maintain the status quo, for such is the social contract demanded by liberal democracy. Harm must be balanced with care; fairness with reciprocity. There must be space for sanctity and respect for authority.

One might expect Englandâ€™s Ã©lite intellects to realise and understand this.

Shamefully, they do not.