Gotta love those saints of old.

Boniface returned to Upper Hessia and repaired the losses which occurred during his absence, many having drifted back into paganism; he also administered everywhere the Sacrament of Confirmation. He continued his work in Lower Hessia. To show the heathens how utterly powerless were the gods in whom they placed their confidence, Boniface felled the oak sacred to the thunder-god Thor, at Geismar, near Fritzlar. He had a chapel built out of the wood and dedicated it to the prince of the Apostles. The heathens were astonished that no thunderbolt from the hand of Thor destroyed the offender, and many were converted. The fall of this oak marked the fall of heathenism. Tradition tells us that Boniface now passed on to the River Werra and there erected a Church of St. Vitus, around which sprang up a town which to the present day bears the name of Wannfried. At Eschwege he is said to have destroyed the statue of the idol Stuffo. Thence he went into Thuringia.

Now, where is my axe? 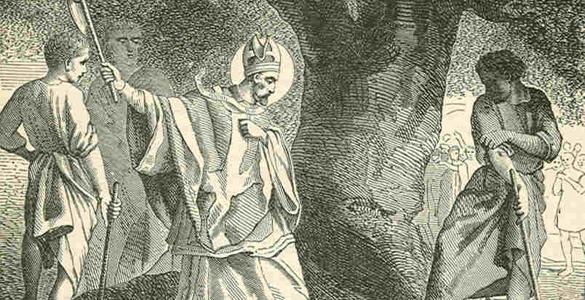 3 Comments on “Botany with Boniface”