An interesting piece in today’s Independent which includes a story that lots of us knew about but no-one had published till today. 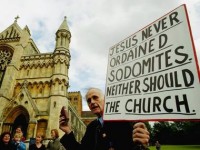 The Church long ago decided there was essentially nothing to stop a gay man who lived a life of celibacy from becoming a bishop. Even within the orthodox wings there was acceptance it would be difficult to exclude someone who was living in an entirely celibate civil partnership – for most traditionalists the line in the sand was engaging in a physical, same-sex relationship.

But a grey area remained concerning clergy who at one time or another had a same-sex relationship but had since abandoned it in favour of celibacy. Could someone who had been physically homosexual ever become a bishop?

The Church’s legal note provided a stark answer. Only those who had “repented” their physically homosexual past could be considered for a bishop. You could be a gay bishop, but only if you vocally shunned your sexual past, a condition which is not imposed on heterosexual applicants.

Within conservative wings the caveat quickly became gleefully nicknamed “The Jeffrey John clause” – after the openly gay Dean of St Albans who was humiliatingly made to relinquish his appointment to the Bishop of Reading in 2003 following traditionalist outrage over his promotion. Dr John lives in a celibate relationship but has always said refused to apologise for his past.

In effect, the decision meant those who remained in the closet could climb the ecclesiastical pole, but those who were honest about their sexuality were disbarred. To the liberals it was a slap in the face – another clear indication that senior leaders within the Church of England had no desire to rock the boat or confront an issue that has deeply divided the Anglican Communion for much of the past 15 years.

Further on there’s the exclusive.

The Independent also understands Dr John was not even long-listed for the currently vacant post of Bishop of Edinburgh, meaning no church leader was willing to put him forward for another key diocese with liberal leanings.

I knew about this since well before Christmas but now another source tells me that Dr John was absolutely furious that even the liberal diocese of Edinburgh (which is in the Episcopal Church of Scotland and notÂ the Church of England) wouldn’t take the risk of appointing him and didn’t even want to invite him down to interview before the drawing up of theÂ short-list. But it appears that the correspondence between Dr John’s solicitors and Church House wasn’t prompted by this, but rather the publication in June not only of the Church House legal advice but also the leaking of Colin Slee’s memos on the Southwark appointment process.

It’s worth looking again at the so-called “Jeffrey John Clause” (wherever Jerome Taylor got that from as a title, it’s genius).

29. Relevant factors which can properly be taken into account include:

Read it carefully. Whoever drew up this advice realised, as John Richardson has commented before, that simply objecting to Dr John’s teaching on the subject of homosexuality would leave many other bishops regardless of sexuality or sexual history in the same position. So the legal argument doesn’t go down that road, but it does have three bullet points that raise some interesting questions.

Let’s just assume for one moment that the repetitive claims by Colin Coward of Changing Attitude that there are already plenty of gay bishops in the Church of England are true. Would there be a way that they could fall within the confines of the legal consideration outlined above and yet Jeffrey John wouldn’t? Let’s lay out some scenarios.

Let me be bold in speculation. Reflecting on the legal guidance that was published last June but existed in some form since 2010, it’s almost as though the lawyers sat down with some senior people in Church House and Lambeth Palace and said, “We can draw up some legal guidance for you, but first of all we need you to be absolutely honest about what the current state of play is in the House of Bishops”. And having got an honest answer, they then drew up the relevant legal guidance that would make sure that the Church hierarchy wasn’t being hypocritical.

Back to Jerome Taylor’s piece.

At a time when such rancour and disagreement already abounds, there are few senior leaders willing to throw another spanner in the works.

But some liberals believe now is precisely the time for them to force the issue. “We are determined to campaign for full equality right now,” says Colin Coward, director of Changing Attitude, the most prolific, pro-gay lobby within the Church. “There is no sense of urgency among Church leaders. But the Church is sick, it needs to be fixed right away.”

One suspects 2012 is going to be very messy in the Church of England, especially if those who are revisionist see the argument going against them and try toÂ embarrassÂ the church as a response. I reckon that sadly the year won’t be out before someone will be.

79 Comments on “Jerome Taylor on the Jeffrey John Story”