A new feature for this blog. In an irregularÂ series we’re going to look at claims made about research in the area of sexuality that affects the debate in the Church and the wider society. Here’s our first candidate – Anglican Mainstream’s post yesterday on “Good reasons why SSM is a bad idea”. Let’s see if this first good reason has any substance.

1/ Sexual exclusivity (i.e. sex only with oneâ€™s partner) is not the norm for partnered gays. According to recent research (1) done by the leading American National HIV Behavioral Surveillance System, Center for Diseases Control,Â â€˜monogamyâ€™ or sexual exclusivity is not a commonly-heldÂ norm for partnered gays.Â Â The research sample is hugeâ€”11,000 gay men were interviewed.Â Â Of those, 68% of those who had a primary partner also had approximately two casual sex partners outside their relationship each year (i.e. they were â€™openâ€™).

Gay marriage (GM) advocacy groups know this is true but continue to exploit heterosexual ignorance by describing their partnerships in terms of their â€˜stabilityâ€™, â€˜faithfulnessâ€™, and â€˜commitmentâ€™.Â Â These terms and the realities they represent are commendable but do not define actual sexual behaviours.Â Â In fact, the term, â€˜monogamyâ€™, is even deployed but it has been redefinedÂ to mean love and commitment.Â Â According to this research, over two-thirds of partnered gays operateÂ according to a paradigmÂ which at first sounds much the same but on closer inspection is fundamentally different. They love and commit to one, but can have sex with others.Â Â It is called having oneâ€™s cake and eating it.

But more here is at stake. GM advocacy groups are not publicly repudiating the â€˜openâ€™ partnership paradigm; they are not insisting theirÂ partnered members sign up to traditional notions of sexual exclusivity (â€˜forsaking all othersâ€™).Â Â In fact, many are suggesting that â€˜openâ€™ relationships are the way forward, for the future and well-being of marriage.Â Â They are presented to the world as trendy and progressive â€”no doubt the rest of the world will soon catch up.

OK, let’s look at the argument being made here. Let me repeat what has been claimed and see whether (a) the research actually says that and (b) whether it has any bearing on the issue of the definition of marriage. Here’s claim number one.

Sexual exclusivity (i.e. sex only with oneâ€™s partner) is not the norm for partnered gays.

Let’s look at the actual data. This is a copy of the relevant table from the referenced document. 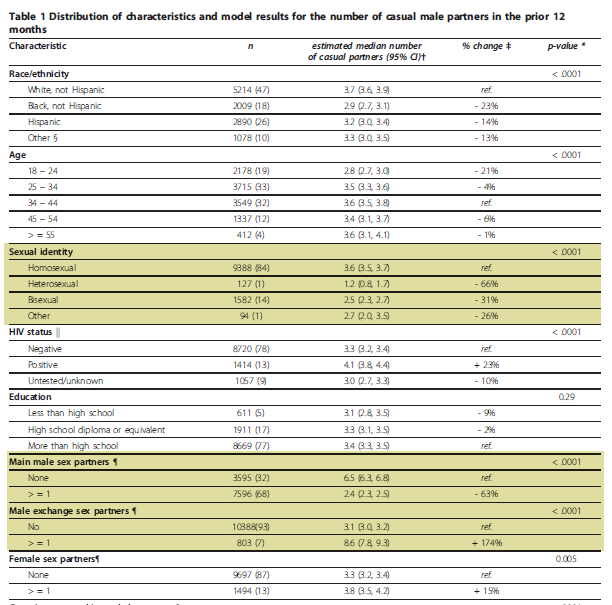 Right,Â what does the table actually tell us? The first highlighted section underlines a clear truth that comes out time and time and time againÂ in these types of surveys, namely that those who self identifyÂ as homosexual tend to have far more sexual partners thenÂ those who don’t (in this case 3 times as likely). However,Â the claim made is that “sexual exclusivity is not the norm for partnered gays”. For this assertion we need to lookÂ at the next set of results highlighted. What they tellÂ us is that for the 32% of those surveyed (regardless of sexuality)Â who don’t have a regular male sexual partner, on average they have 2.7 (6.5 / 2.4) times more sexual partners then those who do have a “partner”.

However, nothing is this particular observation makes any separation between the sexual orientation of those who are in the “2.7 times more sexual partners” category. Yes, self-identified heterosexuals make up only 1% of the sample (lots of “straight” men have sex with men) but that’s enough to have an impact on the figures.

But this isÂ just the startÂ – the paper makes no precise definition of what “partner” means in the context of this research. The definition used was

someone you feel committed to above all others

and this could mean a number of things to different people. We need to ask what “committed” actually meant – one person’s committment is another person’s three or four week affair.

But this is not itself the crux of the criticism. What is being opposedÂ here by citing this research is same-sex marriage, i.e. a same-sex couple in an expressed, monogamous union sanctioned by law. There is absolutely no data in this research that covers that subject. It could be that 7596 men who had one “main partner” includes 500 men in civil unions / gay marriage (as defined in the municipality where they reside). If every single one of these men was strictly monogamous then the remaining 7096 would have an actual average number of partners of 2.6 (go do the math if you don’t believe me). That’s a pretty small uplift for taking out a significant proportion of this sub-population who might be monogamous.

Here’s the point – if the attempt of citing this article is to argue that those men who enter intoÂ same-sex marriage will be far more likely to not be monogamous then current heterosexual couples who enter marriage, no evidence has been providedÂ to support such a proposition. In some senses we are in a good positionÂ to make such a judgement – we now have hundreds, nay thousandsÂ of gay couples who have entered civil partnerships / civil unions / same-sex marriage on both sides of the Atlantic to repeat this research asking the relevant question on domestic status and dividing out the results appropriately. But this survey does not do that, it doesn’t ask that question. It doesn’t explore the likelihood or otherwise of any particular gay man with any particular attitude to monogamy to want to enter into gay marriage or civil partnership of not.

Furthermore, there is no comparison to married couples or other heterosexual couples who consider themselves “partnered”. For all we know they could demonstrate exactly the same promiscuity rates! Remember, the definition of “partner” is loose enough to cover all kinds of relationships.

One more observation. The following claim is made,

According to this research, over two-thirds of partnered gays operateÂ according to a paradigm which at first sounds much the same but on closer inspection is fundamentally different

This is completely unsupported by the data above and I would like to see someone who disagrees demonstrateÂ where it is. I am presuming the “two-thirds” figure is taken from 68% of those surveyed who had a main sexual partner, but that simply means that over two-thirds of those surveyed reported having a partner. By definition the remaining 32% are notÂ partnered so to say “over two-thirds of partnered gays operateÂ according to a paradigm which at first sounds much the same but on closer inspection is fundamentally different” is utterly incorrect.

So what can we learn from this? A simple lesson, that moving from generalisations to specifics is a dangerous thing when dealing with research. Like those (on both sides) who misinterpreted the latest research from Jones and YarhouseÂ on sexual orientation change efforts, we need to learn that pieces of statistical research tell us the things that they are designed to tell us and often little else. We always need to clarify terms and definitions and stick to them.

If the question being asked is “What are the promiscuity rates for gay men who say that they have one partner (whatever that means) compared to other gay men”, then the survey helps us. It tells us that those gay men who have a “partner” are almost three times less promiscuous thenÂ those who don’t. Within that group will almost certainly be gay men who are strictly monogamous. However, if the question being asked is “Are gay men who seek to enter a partnership / civil-union / marriage more promiscuous then straight men who seek to do the same”, the survey can tell us absolutely nothing about that since it only covers men who have sex with men. That means, to use it by itselfÂ as an argument comparing gay men to straight men, let alone to talk about the subset of those who want to enter “gay marriage” is fallacious at best and duplicitous at worse.

As Philip points out in the comments below, the survey itself was a self-selecting sample from those attending gay clubs and bars. This just compounds the inaccuracy of using it to make any meaningful statement about the wider gay population, let alone those who wish to enter formalised unions.

Whilst the research does tell us (interestingly enough) something aboutÂ how gay men who partner actually decrease their promiscuity dramatically in comparison to gay men who don’t, since it hasÂ neither any questions about being in civil unions / gay marriage or even the intent to enter a civil unionÂ / gay marriage ORÂ any statistics on comparitive rates of promiscuity for straight men, it cannot be used to support an argument against same-sex marriage in any meaningful sense.

Unlike Anglican Mainstream who do not permitÂ comments and therefore don’t let anyone interact with their assertions, you are welcome to engage with the research below. However, stick to the matter in hand which isÂ the research itself, not ad hominemsÂ on the authors of any particular blog post. Anyone impuningÂ motives as to the way this research has been represented or expressing derogatory remarks will find themselves banned very quickly. If you’re at all curious as to whether a comment might get you banned, don’t write it. I am absolutely notÂ going to permit anyone to do anything but discuss the research on this thread.