↓ Skip to Main Content
Home › Homophobia › The Cross in the Closet

The Cross in the Closet 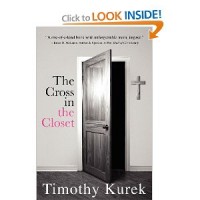 Timothy Kurek grew up hating homosexuality. As a conservative Christian deep in America’s Bible belt, he had been taught that being gay was an abomination before God. He went to his right-wing church, saw himself as a soldier for Christ and attended Liberty University, the “evangelical West Point”.

But when a Christian friend in a karaoke bar told him how her family had kicked her out when she revealed she was a lesbian, Kurek began to question profoundly his beliefs and religious teaching. Amazingly, the 26-year-old decided to “walk in the shoes” of a gay man in America by pretending to be homosexual.

For an entire year Kurek lived “under cover” as a homosexual in his home town of Nashville. He told his family he was gay, as well as his friends and his church.Â Only two pals and an aunt â€“ used to keep an eye on how his mother coped with the news â€“ knew his secret. One friend, a gay man called Shawn â€“ whom Kurek describes as a “big black burly teddy bear” â€“ pretended to be his boyfriend. Kurek got a job in a gay cafe, hung out in a gay bar and joined a gay softball league, all the while maintaining his inner identity as a straight Christian.

The result was a remarkable book calledÂ The Cross in the Closet, which follows on the tradition of other works such asÂ Black Like Me, by a white man in the 1960s deep south passing as a black American, and 2006’sSelf-Made Man, by Norah Vincent, who details her time spent in disguise living as a man. “In order to walk in their shoes, I had to have the experience of being gay. I had to come out to my friends and family and the world as a gay man,” he told theÂ Observer.

Kurek’s account of his year being gay is an emotional, honest and at times hilarious account of a journey that begins with him as a strait-laced yet questioning conservative, and ends up with him reaffirming his faith while also embracing the cause of gay equality.

Along the way he sheds many friends, especially from Liberty, who wrote emails to him after he came out asking that he repent of his sins and warning that he faced damnation. He does not regret their loss. “I now have lots of new gay friends,” Kurek said.

But it was not a straightforward journey. Early on Kurek decided to try to acclimatise to Nashville’s gay scene by visiting a gay nightclub. Entering alone, he soon found himself dragged on to the dance floor by a shirtless muscular man covered in baby oil and glitter. As the pair danced to BeyoncÃ©, the man pretended to ride Kurek like a horse to the disco music and called him a “bucking bronco”. It was all a bit too much, too soon. “I want to vomit. I need a cigarette. I feel like beating the hell out of him,” Kurek writes.

But soon things started going better. In order to avoid unwanted sexual passes from men, Kurek recruited Shawn to act as a faithful boyfriend and he rapidly became part of the Nashville gay scene. He explored gay culture and found it to be as diverse and interesting as any other slice of American life. In one gay bar, Kurek was stunned to discover gay Christians earnestly discussing their belief in creationism. “I found gay Christians more devout than me!” Kurek says. He became active in aÂ gay rightsÂ group and wound up joining a protest outside the Vatican’s embassy to the United Nations inÂ New York.

Want a copy of his book? You can buy it hereÂ after watching the video trailer for it.

17 Comments on “The Cross in the Closet”