As I tweeted earlier today, George Kovoor has resigned as Principal of Trinity College Bristol. 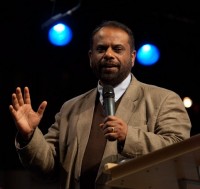 Revd Canon George Iype Kovoor has announced his departure from Trinity College Bristol at the end of the summer term having served as its Principal for eight years. During that time Trinity has grown significantly and has gathered together a team of internationally reputed scholars and practitioners onto its faculty. It established a strategic partnership with the Diocese of Bristol, pioneered Context-based Training, developed a part-time training course, and founded Henry Martyn House as a centre for the study of world Christianity. This, along with the increased number of ordinands over this period, places it as a leading UK evangelical theological college.

The Trustees note with gratitude the comments made in the recent Ministry Council Report that identified the ‘vision, energy and determination’ that Canon Kovoor has brought during his tenure and noted his contribution in establishing the College’s current health and vibrancy. The Trustees express their gratitude to Canon Kovoor for the legacy he leaves which includes a renewed missional spirituality, an innovative and entrepreneurial ethos and a commitment to the world Church and to world-class academic research and practice. In recording their thanks to Canon Kovoor for his leadership of the College, the Trustees express their best wishes to him for the future.

The search for his successor will begin during the summer term.

The resignation was announced to staff and students at lunch today and there was a brief statement read out by Kovoor and Tony Miles, the Chair of Trinity College Council. ItÂ follows an inspection reportÂ earlier this year from the Ministry Division of the Church of England which highlighted “serious concern about a number of governance and managerial issues”. Concerns were raised about lines of accountability, the nature and authority of the Senior Management Team and the lack of any management training for those in senior positions. The report went on to say,

In any institution, much turns on the Principal. Trinity is blessed with a proven and outstanding leader who is widely recognised as having a strong and charismatic personality and a managerial style that can be both forceful and determined. But this has its disadvantages. We noted that many staff felt they had little input to day-to-day discussion and decision-making, and some had been upset by personal encounter when attempting to challenge or question that authority (see paragraph 36). A lack of clarity about lines of authority and decision-making during the Principalâ€™s frequent and sometimes extended absences while building up the Collegeâ€™s working relations overseas, risks further disempowerment of staff colleagues. Our concern, as expressed in Recommendation 8, is neither to blame nor fault a team of gifted and committed people, but simply to urge the Collegeâ€™s Trustees and the Chair of governors to take a firm lead in promoting greater collegiality in the Collegeâ€™s life and business, and to create staff working structures and lines of accountability that would facilitate it.

The Council should review its organisational structure, including the role and composition of the SMT, the role of the Vice Principal and the provision of leadership and management training, in order to ensure greater clarity and accountability, and to be in line with its strategic and operational plans and its ability to deliver them.

Sources within the college indicate that the Hall Council have been working with George Kovoor for a number of months to facilitate today’s announcement.

Trinity Bristol is the second Church of England training college in the past year to have seen issues with governance and accountability. Last summer Richard Turnbull resigned as Principal of Wycliffe Hall after concerns about his management style.