There is nothing new under the sun, and that goes without saying for Bishops attempting to make an argument for same-sex marriage. The latest to have a go is Nick Holtam, the Bishop of Salisbury. In a letter to Lord Ali, and printed in the Telegraph today, he makes the following argument. 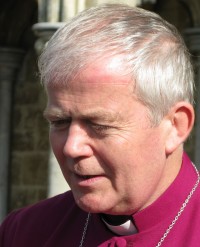 Whilst marriage is robust and enduring, what is meant by marriage has developed and changed significantly. For example, the widespread availability of contraception from the mid- twentieth century onwards took several decades to gain acceptance for married couples by the Lambeth Conference in 1958. The newer forms of the Church of Englandâ€™s marriage service have since recognised that the couple may have children. Over the last fifty years the Church of England has come to accept that marriages intended to be lifelong can break down and that on occasion marriage after divorce can be celebrated in the context of Church. It is also the case that most couples now live together before they marry. This happens without censure from the Church which continues to conduct these marriages joyfully even though the Churchâ€™s teaching is that sexual relationships are properly confined to marriage.

The desire for the public acknowledgement and support of stable, faithful, adult, loving polygamous sexual relationships is not addressed by the many Biblical passages about polygamy which are concerned with sexual immorality, promiscuity, idolatry, exploitation and abuse. The theological debate is properly located in the Biblical accounts of marriage, which is why so many Christians see marriage as essentially about two people only. However, Christian morality comes from the mix of Bible, Christian tradition and our reasoned experience. Sometimes Christians have had to rethink the priorities of the Gospel in the light of experience. For example, before Wilberforce, Christians saw slavery as Biblical and part of the God-given ordering of creation. Similarly in South Africa the Dutch Reformed Church supported Apartheid because it was Biblical and part of the God-given order of creation. No one now supports either slavery or Apartheid. The Biblical texts have not changed; our interpretation has.

The ultimate irony of this line of argument (“stable, faithful, adult, loving” – SFAL) is that it’s proponents blatantly do not believe what they say. If Nick Holtam really thought that all that was needed for marriage was stability, faithfulness, adults and love, then he would have to support such polygamous relationships, let alone familial sexual relationships which meet the same criteria. But in actuality, Bishop Nick would probably happily say he doesn’t support such marriages.

If that’s the case, can the good Bishop please amend his argument? If it is only about SFAL, then why condemn other relationships that meet this criteria? Looks like plain old-fashioned bigotry to me. If it’s about more than SFAL, why make an argument for same-sex marriage which is only based on those four factors?

As it stands, the Bishop of Salisbury has made a magnificent argument for polygamy. I wish him much success in convincing the House of Bishops of its merits.