Mark Yarhouse and the Institute for the Study of Sexual Identity use this Three Tier Distinction to help people articulate the relationship between their sexual identity and sexual attractions. 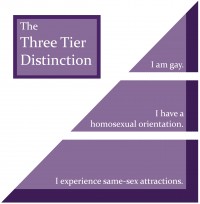 When we refer to the â€œthree tier distinction,â€ we are talking about a distinction between same-sex attraction, a homosexual orientation, and a gay identity.Â Â  Same sex attraction refers to experiences of physical and emotional attraction to a person of the same sex.Â  It does not define a person. In fact, it is one of the most descriptive ways to talk about a personâ€™s experiences.Â  Homosexual orientation describes the persistence of attraction to the same sex. When a person speaks of having a homosexual orientation, they are again not necessarily defining themselves as a person, but providing information about their same-sex sexuality as an enduring pattern of attraction.Â  When we think about the word â€œgayâ€ as an identity, we often refer to a person who adopts the word â€œgayâ€ as who they are (rather than how they are). We recognize that there is a new generation of Christians who use gay more as an adjective to describe their sexual orientation, for example, a traditionally believing Christian who has a homosexual orientation might say, â€œI am a celibate gay Christian.â€ Others, however, use gay to designate who they are (as identity) and others often assume through that identity label that the person views same-sex relationships as morally permissible.

The three tier distinction provides an alternative route to how one thinks about their identity and it can be useful to some people at certain points in their identity development. The three-tier distinction would allow a person who experiences same sex attraction or a homosexual orientation to describe what they experience/feel without making a statement about their identity. Identity is a label that a person can choose for themselves, and different people have made different decisions about identity labels and their meaning. For example, some Christians have preferred to form their identity in Christ rather than referencing their same-sex sexuality. Others do both in referring to themselves as either a â€œgay Christianâ€ or a â€œcelibate gay Christian.â€

The three tier distinction should not be used to set an expectation that another person use descriptive language over an identity label. Rather, it is intended as a pastoral or counseling resource for those who find it helpful as they navigate sexual identity questions and concerns.

Is this a useful way to talk about the distinction of sexual attraction and sexual identity? If not, why not?

2 Comments on “The Three Tier Distinction”