… in theory if not in practice.

Yesterday afternoon, the Synod of the Diocese of Pittsburgh voted to change it’s constitution so that its loyalties lay not with the national American Church but with the wider Anglican Communion. This is essentially the beginning of the schism in the USA.

Clergy and deputies to the Episcopal Diocese of Pittsburgh’s 142nd Annual Convention strongly approved a resolution that begins the process of amending the diocesan constitution. If the amendment passes a second reading, slated for November of 2008, a future diocesan convention would be able to realign the diocese to another province of The Anglican Communion if it so chose.

Deputies voted 118 to 58 with one abstention to approve the change. Clergy voted 109 to 24 in favor. An effort to instead return the diocese to full “accession” to The Episcopal Church was defeated by voice vote. “This vote does not change the diocese’s current affiliation with The Episcopal Church. In fact, nothing at all changes until such a time as the next annual convention approves a second reading of the proposed amendment,” said Bishop Robert Duncan.

If the second reading is also approved, the constitutional change will secure for the diocese the right to realign with another province of The Anglican Communion. Exercising that right would require a separate vote at the time of the second reading of the constitutional change, or by a future diocesan convention, preceded by serious discussions with any province that might receive the diocese.

With a strong mandate after the vote on the first reading, the next year will be spent working through the details of what would be involved in realigning the diocese with another province of the Anglican Communion. Approving this motion, said Bishop Duncan in his convention address “signifies an intention, gives warning, and introduces a period of preparation for anticipated consequences.”

Over the coming year, said Bishop Duncan, the diocese will need to determine which province it might realign with, develop acceptable options for congregations unwilling to realign, and negotiate with the Episcopal Church nationally and others locally about a mediated alternative to continuing or escalating legal battles.

“We have much work ahead of us, not the least of which is to walk through this time of change with grace and charity to all,” said Bishop Duncan.

Of course, you could hardly expect the leadership of TEC to let this happen, and KJS has issued the following threat:

I call upon you to recede from this direction and to lead your diocese on a new course that recognizes the interdependent and hierarchical relationship between the national Church and its dioceses and parishes. That relationship is at the heart of our mission, as expressed in our polity. Specifically, I sincerely hope that you will change your position and urge your diocese at its forthcoming convention not to adopt the resolutions that you have until now supported.

If your course does not change, I shall regrettably be compelled to see that appropriate canonical steps are promptly taken to consider whether you have abandoned the Communion of this Church — by actions and substantive statements, however they may be phrased — and whether you have committed canonical offences that warrant disciplinary action. 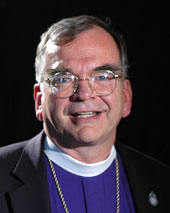 Here I stand. I can do no other. I will neither compromise the Faith once delivered to the saints, nor will I abandon the sheep who elected me to protect them.

This is then part two of the realignment that begun with the formation of CANA last year. As I wrote then:

CANA is the beginning of the end for TEC, and they know it. It is the rump, but seeded and growing rump, of a movement that will provide a framework for orthodox bishops and ecclesiastical structures to be put in place in the USA where the current bishops and structures have apostatised. While some TEC Dioceses will join the new orthodox framework as a whole, in other places parishes will need to be transferred into the emerging, Communion recognised, structures in order to maintain Episcopal polity. I think Bob Duncan of the Anglican Communion Network recognised as much when he writes:

“There is no question that the clergy and people of The Falls Church, Truro Church, Church of the Apostles, Christ the Redeemer, St. Stephen’s, Church of the Word, St. Margaret’s and Potomac Falls remain fully and faithfully Anglican. Their deliberate decision-making process and patient efforts over the last two years to chart a peaceful and prayerful course forward should be an example to all those contemplating their future relationship with The Episcopal Church. It is now up to the leadership of the Diocese of Virginia to choose between embracing a charitable parting of ways or pursuing destructive litigation. I pray they can see their way to selecting the first course.”

But that isn’t the clincher. The clincher is the first sentence of the following paragraph:

Led by Bishop Martyn Minns of Truro Church and the Rev. John Yates of The Falls Church, a number of Virginia parishes began a 40-day process of discernment this fall.

God speed Bob Duncan, the Diocese of Pittsburgh and all who have finally realised that TEC is apostate and there is no longer any reason to stay within her.