Our child is 15 weeks old 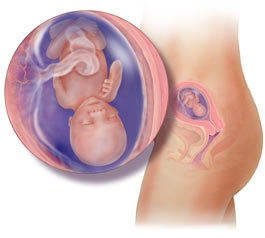 You may not know it when it happens, but your tiny tenant frequently gets the hiccups, which babies master before breathing. Babies don’t make any sound because their trachea is filled with fluid rather than air.

Although you’ve probably gained between 5 and 10 pounds / 2.2 – 4.5 kilograms, the fetus weighs in at around only 2.5 ounces / 70 grams. It measures nearly 4 inches / 11 centimetres long, crown to rump. Legs are growing longer than the arms now, fingernails are fully formed and all the joints and limbs can move. You may be able to find out the sex of your baby by ultrasound now, since the external genitals may be developed enough that the ultrasound technician can tell you if you’re going to have a boy or a girl.

If the idea of having a baby seems so remote, nothing makes it feel more real than feeling your baby move for the first time. Most mums-to-be discern movement (called quickening) between 16 and 20 weeks. If you’ve been pregnant before, you’ll feel things earlier rather than later. What you may first think is a rumbling stomach may be your baby doing some back flips. Make note of when you first start feeling the baby and tell your midwife at your next visit. This middle stage of pregnancy is a good time to start exercising.