Travelling through Central London – Some Clarifications

Apparently there is some concern about my previous post, particularly whether any of the routes I highlighted are actually any good. I think we need some clarifications.

i) I used to drive into Central London, especially Westminster, at least once a week for over 5 years. That was however 5 years ago. If my memory of particualr roads is hazy, I apologise.

ii) Oxford Street – To the best of my knowledge east bound traffic is diverted northwards around Bond Street, but west bound traffic is able to get through. If anybody can substantiate that, or disprove the statement, please comment below.

Now, let’s turn again to the real point on contention – whether Gene could have coincidentally driven past the Bishops off-loading into Buckingham Palace or whether he would have had to have made a particular diversion to see them.

In the picture below, route 1 is the most obvious route to take coming from the South East and passing through Central London. You come stright through on the A2, switching to the A202 and coming over Vauxhall Bridge Road, then passing by the back of Buckingham Palace before reaching Hyde Park Corner. The key point here is that though you are passing along the back wall of Buckingham Palace (which many people taking this route don’t realise), the closest you come to the front entrance of Buckingham Palace (where the Bishops I am reliably informed entered from) is 500 metres. Furthermore, this isn’t a 500 metres of clear line of sight. Taking route 1 you simply would not be able to see the Bishops entering in to Buckingham Palace. Period.

However, if you came along The Mall, you would come directly face to face with the entrance (as route two, passing up the Mall and then Constitution Hill shows). However, such a route comes through Admirality Arch from Trafalgar Square, and the most obvious route to get to Trafalgar Square from the East or South East is to have come along the Strand (2a) which is an absolute nightmare and it also implies that you came across one of the more easterly bridges, in which case you would just head north and go along the A40 or the Euston Road. You could have come up Whitehall (2b), but that implies that you crossed the Thames at Westminster Bridge which is not even vaguely the obvious choice trying to get through Central London as you would have had to have taken a massive unnecessary detour around Waterloo Station (marked with a big blue rectangle at 2c) to get to the Bridge. 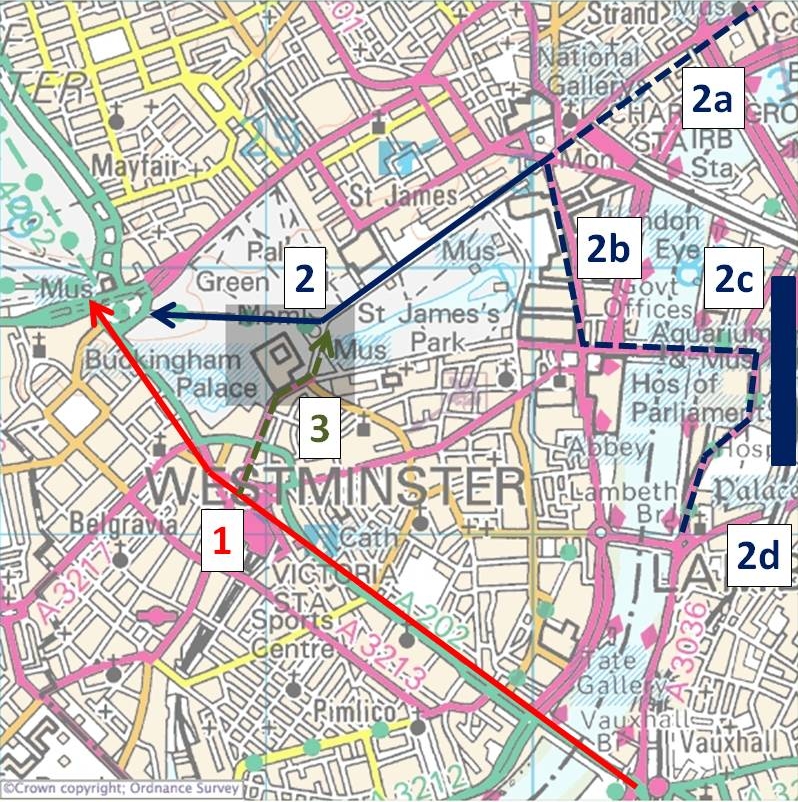 Now, let me address two further points. Firstly, I have been criticised for spending time on this, that I should be doing other things. Let me respond by stating very clearly that ad hominem like this doesn’t in any way tackle the issue as to whether Gene Robinson is being misleading when he implies that driving past Buckingham Palace at the same time as the Bishops unloaded was a complete coincidence. Furthermore, I am responsible for my workload here, and there are plenty of times when I don’t blog for days because I am too busy doing parish work.

"I would love just to be a simple country bishop, but that just doesn’t seem to be in the cards."

Gene Robinson is not a victim in the slightest. He has it well within his power to be the Simple Country BishopTM he claims he wants to be by simply turning down all media requests and getting on with the job of running the Diocese of New Hampshire. The fact that he doesn’t, despite stating that he wants to, and that he then procedes to glory in every single opportunity to appear and speak on the gay issue is a clear sign that he doesn’t want to be a simple country bishop.

It is, and here I know I’m going to offend a lot of people, sheer narcissism, nothing more, nothing less, to claim to really, really, really want to do one thing but then to just *have to* do the exact opposite.

I say that, not to have a go. I know that I have to deal at various times with my own narcissism and that it is a painful process because it involves dying to my fallen desires for validation. But it genuinely pains me that day after day Gene Robinson seems not to get the simple fact that by setting up his "victim" picture of himself as a validator for his globe-trotting media engagements, he is doing exactly what classic narcissists do. It is ultimately all about him, him and him – were it not then he would do exactly what he says he wants to do, stay at home being a simple country bishop, instead of appearing in front of the camera again and again and again.

As a personal contrast, in the past two weeks I have turned down a number of requests to do TV and radio, simply because I want to stay here in the Parish to do the work that is needed. We went over to Canterbury last weekend because that’s where Gayle’s parents are, and because it gave me the opportunity to catch up with some friends who would be there at the same time.

And I guess that’s the reason why so many of us are highlighting his media appearances, because we want others to realise that Gene Robinson is not in any sense a victim, but rather is the orchestrator of his (and ours) current malaise. His very journey over to Canterbury at this time is a clear example of that, and all the individual moments within that journey just add to the picture.

Jesus said "If the Son sets you free, you will be free indeed" (John 8:36). Gene Robinson claims that he wants the freedom just to be the Bishop of New Hampshire. Given that that wish is totally within his power, one wonders why instead he is in Canterbury instead of Concord, NH?

10 Comments on “Travelling through Central London – Some Clarifications”