Cranmer on Obama and Abortion

McCain might not be the perfect package, but as Cranmer rightly points out, at least he doesn’t vote in favour of infanticide.

Senator Obama voted three times against a Bill which would have outlawed the evil of ‘live birth abortion’.

It is a termination process which involves the birth of a live baby, the issuing of a birth certificate, the purposeful abandoning of the baby to a slow and tortuous death, and the callous issuing of a death certificate.

Is this not infanticide?

By law, if an aborted baby is born alive, both birth and death certificates must be issued. Ironically, the cause of death often listed for live aborted babies is ‘extreme prematurity’, which amount to a confession by doctors that they have caused this death. It is not uncommon for a live aborted baby to linger for an hour or two or even longer. One baby is reported to have lived for almost an entire eight-hour shift. Many of these babies are born completely healthy, for they are terminated at 40 weeks for the ‘health’ of the mother, and also in cases of rape or incest. Ever since Doe v Bolton (the companion case to Roe v Wade) the United States Supreme Court has adopted the definition of the World Health Organisation for ‘health’, defined as ‘any condition that might impact her physical, emotional, psychological or financial well being’.

So live birth abortion is permitted in many US states up to nine months for emotional (can’t cope), psychological (don’t want to cope) or financial (can’t afford it) reasons, effectively extending abortion to on demand. 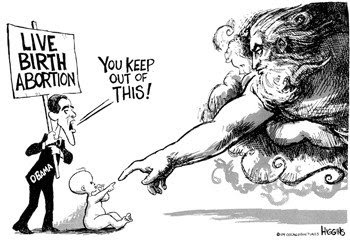 When the aborted baby is born alive, he or she (for the baby can no longer be an ‘it’) receives what is known as ‘comfort care’, during which the baby is kept warm in a blanket until he/she dies. Parents (for that is what they are) may hold the baby if they wish. If they do not want to hold their dying aborted baby, a staff member cares for the baby (if they have time) until he/she dies. If staff do not have time, the baby is simply abandoned to die a slow, lingering death.

Perversely, the evil of child-killing is given spiritual trappings, with the option of baptism for the child who is killed. Hospitals provide baptismal certificates and gowns, and even a first-photo machine to record the birth.

All of which is cynically designed to make the parents (and medical staff?) feel better about the murder.

Cranmer would genuinely like to know how any Jew, Christian or Muslim could vote for a man who not only privately supports this practice, but actively legislates for it. Pace Biden and Pelosi, how do all these ‘Catholics for Obama’ reconcile this manifest abomination with their Church’s teaching on the sanctity of life? According to the LA Times, no candidate in recent memory has entered the White House without securing a majority of the votes cast by Catholics, who now constitute 25 per cent of the population. Is the Catholic vote any longer Catholic?

17 Comments on “Cranmer on Obama and Abortion”