↓ Skip to Main Content
Home › UK Politics › Is this a straight forward lie?

Is this a straight forward lie?

Got in this lunchtime to find this Lib Dem leaflet on the doorstep. Have a read of what they’ve written. 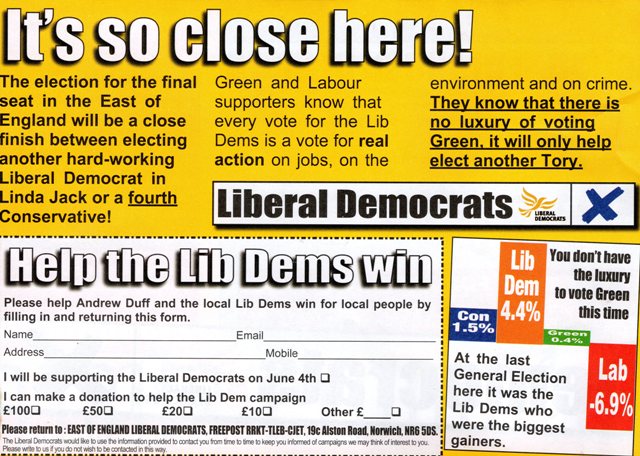 Problem is Lib Dems, I’m a bit of an electoral geek, and I don’t think that the 7th seat in the East of England region in 2004 went to the Conservatives. Let’s have a look at the actual results shall we?

Now of course, for Euro elections we use the d’Hondt system, so the seats were carved out as follows.

What did the leaflet say?

“The election for the final seat in the East of England will be a close finish between electing another hard-working Liberal Democrat in Linda Jack, or a fourth Conservative”

Is this kind of thing allowed? The Lib Dem leaflet is a total misrepresentation of the last Euro vote.

35 Comments on “Is this a straight forward lie?”