↓ Skip to Main Content
Home › Church of England › Is the CofE preparing to take a stand on the Equality Bill?

Is the CofE preparing to take a stand on the Equality Bill?

A very interesting piece in this weekend’s Church of England Newspaper (online at Anglican Mainstream). 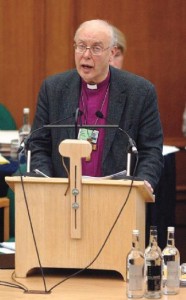 THE GOVERNMENTâ€™S Equality Bill fails to take sufficient account of religion and instead sees society as â€œa collection of individuals,â€ the Bishop of Ripon and Leeds has warned.

Bishop John Packer said the legislation, which aims to bring together in one place many existing provisions and further address matters such as age discrimination, was underpinned by â€œinadequate social analysisâ€.

During a debate on the Queenâ€™s Speech in the House of Lords, he said: â€œIn the Bill there is a dilemma between freedom for individuals to shape their own lives and freedom for groups and communities to define the nature of their common bond. â€œIn a pluralistic society, there must be freedom for communities with particular identities to flourish.

â€œThe Bill is grounded in a view of society as a collection of individuals with rights but fails to take account of the needs of communities to flourish. â€œThat can quickly lead to an authoritarian imposition of an individualistic understanding of difference rather than a celebration of plurality within our society.â€

â€œThe Bill allows exemptions to religious groups only on grounds which fail to understand the nature of religion itself, and so it fails to provide an equal freedom to practise a religion according to the beliefs, practices and ethics intrinsic to that faith,â€ the Bishop added. â€œThat is damaging both to individuals and their practice of faith, and to the contribution which religious groups seek to provide to our plural society, not least in the eradication of child poverty.

While the speech itself is interesting in its robustness, what is equally telling is that Bishop Packer (not by any means the most conservative of the current House) gave it. Now of course there is the fact that the Bishops in the Lords take it in turn to be in effect “the duty purple bloke”, so in some senses it just happened to be Packer’s turn when this portion of the Queen’s Speech was debated, but I still find it significant that the House chose Ripon and Leeds to be the one who delivered this message. If someone on the revisionist side of the House of Bishops (Packer was vocal in his support for Jeffrey John’s elevation to Reading and is one of the patrons of Changing Attitude) tells the Government that the Equality Bill goes too far, methinks it’s time to listen.