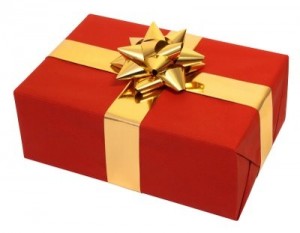 This year with a toddler in the household we have a remarkably different Christmas than last year. Last year at six months old, Reuben was far more interested in the paper that any presents came in. This year he has developed a curious interest for what ever is actually inside the wrapping paper. Heâ€™s even beginning to get the hang of getting rid of the superfluous paper as fast as possible. To be fair though, at a year and a half old heâ€™s pretty happy with whatever he finds inside the paper that heâ€™s ripped off. Heâ€™s not yet understood the concept of a â€œwish listâ€.

A friend of mine whoâ€™s a vicar has a teenage son and he tells me that it gets much worse as they get older. His son recently passed his driving test and decided to ask his dad if there was any chance of him getting a car for Christmas, which was yet some months away. ‘Okay.’ said his dad ‘I tell you what I’ll do. If you can get your ‘A’ level grades up to ‘A’s and ‘B’s, study your bible and get your hair cut, I’ll consider the matter very seriously.’

A couple of months later his son went back to him and my friend said ‘I’m really impressed by your commitment to your studies. Your grades are excellent and the work you have put into your bible studies is very encouraging. However, I have to say I’m very disappointed that you haven’t had your hair cut yet.

Danny was a smart young man who was never lost for an answer. ‘Look Dad. In the course of my bible studies I’ve noticed in the illustrations that Moses, John the Baptist, Samson and even Jesus had long hair.’ ‘Yes. I’m aware of that…’ replied his father ‘… but did you also notice they walked everywhere they went?’

We have a curious relationship with Christmas Presents donâ€™t we? If youâ€™re anything like me, youâ€™ll probably get at least one gift this year that you really donâ€™t know what to do with. Now I mean that not in the â€œIâ€™ve lost the instruction manualâ€ sense but rather in the â€œWhat possessed you to get this for meâ€ sense. So, as a public service and in the spirit of giving that permeates this season, Iâ€™m going to help you with a top five list of things to say when you open the wrapping paper and you take out that absolutely foul knitted pair of socks. Iâ€™ll give you a moment to get your pens out.

5. If I hadn’t put on so much weight recently it would have fitted me perfectly.

4. Gosh, I hope I never lose this. We’re always losing things around here.

3. It’s great; but I’m worried about the jealousy it may create.

2. Just my luck to get this, on the Christmas I promised to give all my gifts to charity.

1. Unfortunately, I am about to enter MI5’s Witness Protection programme.

Of course, there are some presents that we are absolutely looking forward to getting. For example, this year my wife and I have bought each other a Nintendo Wii. There is currently a medium size box sitting underneath the tree and both of us know exactly what is contained inside. At times over the past week or so Gayle has given me that â€œwould it really hurt if we didnâ€™t wait till next weekâ€ look and Iâ€™ve given her that â€œYes it wouldâ€ look back.

We know whatâ€™s coming for us in a few days time. At the same time there are other parcels next to the big box which have come from various family and friends which are going to be a complete surprise when we open. Not that I havenâ€™t dropped enough hints about a nice shiny Mercedes Benz, but all the stuff thatâ€™s come through the post so far hasnâ€™t quite been that big.

I wonder what youâ€™re hoping for this Christmas? Is your wish list as outlandish as mine? Are you going to get a complete surprise or do you know whatâ€™s waiting for you on Friday morning? What are you hoping for? Are your dreams of what might be under the wrapping paper just that â€“ simply dreams â€“ or are they based in a concrete reality of what you know is going to be awaiting for you after tearing away the paper.

Or let me ask you another question â€“ when you decided to come here this evening, what were you hoping for? Did you come thinking that there might be some carols and Bible readings, some candles and a sermon that was hopefully not too boring? Or did you come on the off chance, holding out for a chorus of â€œO Come All Ye Faithfulâ€ but not expecting much beyond that. If you were in the second camp then, for once, we hope weâ€™ve bitterly disappointed you, but my guess is that you knew what was going to happen this evening and thatâ€™s the very reason you came. Your hope for a fantastic evening singing and sharing the Christmas story was not in vain.

We use that word hope in a strange way donâ€™t we? Sometimes â€œhopeâ€ simply means â€œwishful thinkingâ€ â€“ I â€œhopeâ€ Iâ€™ll get a Go-Go Hamster, a Nintendo Wii, a Mercedes Benz. â€œHopeâ€ seems to be a dream, a fantasy, something that would be nice if it happened, but really we know itâ€™s very unlikely.

The Bible uses the word hope in a different way. The Bible talks about â€œhopeâ€ as being sure about something that we know is going to happen but that we canâ€™t yet see. And at first that seems a strange concept, but really itâ€™s an idea that we handle quite happily every single Christmas. Like my wife and myself, I bet that you too have that parcel under the tree, that while you canâ€™t yet see inside, you know exactly what it is. The gift that is unopened but already clearly identified.

The Bible talks about Jesus as the gift that is also clearly identified but not yet opened. The pregnancy and then birth of any child is of course not just a moment of joy but also of anticipation of the future, but in the case of Jesus even more so. This baby in the manger, this infant in the stable is the child who will grow up to die for men and women, to set them free. He is described as the one who heals, the one who brings peace, the one who will reign with truth and justice. He is the one who is alive right now, who we can know personally, who we can know as well as the person sat next to us right now. All we have to do to receive that, says the Bible, is to, as it were, tear open the wrapping paper.

But remarkably, so many of us donâ€™t do that. We come to the Christmas tree, we see the present, we hear of whatâ€™s inside it, but then we walk away and leave it. We simply donâ€™t believe what weâ€™ve been told is inside. We think that itâ€™s too fantastical to be true that we can actually have a relationship with this child who is also the God of the Universe. Or we think that we donâ€™t really want it, that the reality of Jesus is probably going to be a bit rubbish, like a Go-Go Hamster after five minutes of play. Or perhaps we really donâ€™t want it, like the hand knitted socks that weâ€™d go to any length to avoid.

The truth of course is different. As millions and millions of men and women down the years have discovered, Jesus is the best Christmas present of all. Theyâ€™ve discovered that beyond the joy and happiness that gifts and family bring at this time of year, is an even better joy. That joy is discovering the truth about Jesus and way that he gives us real hope all year long, every year, not just the kind of hope that exists for a few weeks before the end of the year in anticipation of the latest things advertised on the TV. Unlike the toy that dies when the batteries die, there is a gift that lives forever, and lives with us forever â€“ but to get it we need to take the risk, open the wrapping paper and discover that the promises we have been told about what will happen when we let Jesus into our lives are absolutely real and true.

So as Christmas is just days away, let me leave you a simple but challenging question â€“ what are you hoping for this year? Are you hoping for a Nintendo, a Mercedes Benz or, God-forbid, a Go-Go Hamster. Are you hoping for family and friends to come and visit, though you know of course that after a few days they will leave again.

Or, this year, beyond all that are you hoping for more? And if you are, will you find him, the best Christmas present of all?