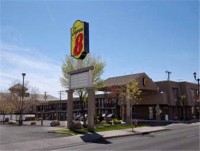 Many moons ago I went on a road trip through southern Utah with an Anglican priest friend of mine. We drove into St George in the early evening and looked for a cheap motel to stay at. It was when we found one that my friend turned to me in the car and said, “Do you mind if we have separate rooms? I know it’ll cost more, but for a long time I’ve made it a habit never to share a room with anyone so as to avoid any hint of anything that might make someone else uncomfortable”. Now, I had been quite prepared to share a room (all the motel rooms had two large queen size beds) but I understood straight away what he was getting at. Plus, having a room of my own meant that I could watch the TV I wanted until whatever time at night I wanted.

As an aside, a few years later I took the same road trip with my wife and we stayed at the Best Western motel in St George on the night before the trial verdict in the Warren Jeffs case. We ended up getting the honeymoon suite because there were no other rooms available (but paid the normal room rate – the manager liked us). That was possibly the best motel room I’ve ever stayed in AND the most number of TV satellite vans I’ve ever seen parked outside my bedroom window.

I digress. Anyway, you all know what I’m going to talk about now don’t you? Sharing rooms has been a topic of news interest here in the UK with a leading political blogger, Guido Fawkes, asking all kinds of questions (and insinuating other things at the same time) about whether it was appropriate for the now Foreign Secretary and de facto number two in the Conservative Party to share a room with a young graduate working for his election campaign. The response was the resignation of the young man (until yesterday he was one of the special advisers to the Foreign Secretary) and a clear and frank denial from Hague that he is gay or that anything sexual happened between the two men.

Now, put aside the more important political issue as to why several leading talented Conservative party activists and advisers got overlooked and instead Hague went for a relatively inexperienced young man to advise him on foreign policy. This blog is far more interested in how Christians would approach the whole issue of room sharing and the principle of “not even a hint” (coming from Ephesians 5:3). Josh Harris, he of “I Kissed Dating Goodbye” fame, wrote a great book with that very same phrase as its title a few years ago. Not Even a Hint is a fantastic read and covers areas around sexual temptation and has lots to say to Christians about how to handle issues of sexual desire and the sexualisation of the modern western world. You might also want to get hold of his follow up book, Sex is Not the Problem (Lust is).

What do you think about unmarried Christians sharing bedrooms? Is it appropriate? Can two people of the same sex share a room but not two people of the opposite sex, or vice-versa? Do the rules change if there are more than two people (i.e. there is a greater accountability)? What are the general principles which we should look to follow? Should we even be assuming that anything sexual might take place in the first place?