Richard Coles in the Church Times

A fascinating interview in the Church Times this weekend with the ex-Communard, now parish piest, the Rev Richard Coles. Here’s the excerpts that I found the most powerful and intriguing. 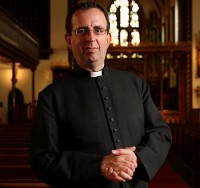 Wasn’t his sexuality an issue? “I think sexuality is always an issue for everyone. If they were startled by my luridly gay past, they didn’t say so. I’ve always tried to be honest with people, and they’ve always tried to be generous back. For some people, this has become the issue of orthodoxy and legitimacy – but I think the rest of us are a bit more fluid than that now. My experience in parishes is that people are just more and more used to gay people being unremarkable.”

Nethertheless, far more is demanded of gay ordinands than of others – namely celibacy. “The standard that is required of you in accord with Resolution 1.10 of the Lambeth Conference is that you have to be celibate. I personally don’t have much time for the Resolution, but it’s not about what I think. It’s about how, at the moment, we struggle to maintain some sort of coherence around a deeply unsatisfactory compromise. Well, you know, there’s nothing new about being an Anglican and doing that. people make their acommodation with Resolution 1.10 in all sorts of ways. My own life conforms to it. So technically I’m ok.”

Is he celibate? “Yeah.” Because of the preiesthood? “It just kind of happened that way. Or rather it didn’t happen, if you know what I mean. It just sort of suits me. I hope there is nothing in any of my relationships that would cause a bishop to blush.”

The whole thing is a fascinating read.

I loved and still love the music that Richard Coles and Jimmy Somerville produced in the 80s. Sheer genius. This is my absolutely favourite track and just captures beautifully the tone of having lost a friend to HIV/AIDS.

77 Comments on “Richard Coles in the Church Times”