The Brighton and Hove Changing Attitude Survey is Flawed

Which is of course not the same thing as saying it’s bad.

The official survey results are out and with it comes a press release that presents a number of the key observations in a misleading manner.

The churches were asked to choose one of four categories to describe their attitude to the LGBT community.Â  These ranged from being fully affirming â€“ â€˜gay and lesbian people can be fully and openly involved in every aspect of the churchâ€™s life, including lay leadership rolesâ€™ through accepting, then tolerating, to condemning â€“ â€˜LGBT people would not be permitted to be in lay leadership rolesâ€¦.the congregation believes that the Bible teaches that homosexual acts are sinful and it is wrong to be in a gay relationshipâ€™.

A notable finding is that not a single church ticked the condemning box which represents the traditional teaching on homosexuality and which continues to be the official doctrine of the Church of England.

32 out of the 39 Church of England churches have responded so far, (responses are promised from the rest).Â  Of these 9 (approx 28%) have declared themselves fully affirming, and a further 18 (approx 57%) say they are accepting and â€˜recognise the equality and worth of openly LGBT people who are valued members of the congregationâ€™. 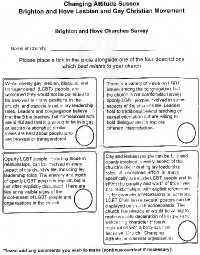 Sounds good, but let’s have a look at the survey text itself to see the problem.

Yes, even if you click on the picture opposite the text is a bit hard to read, so let’s spell out what the four options are.

OK, where to start?

What is good about the survey? Well, it confirms what a lot of us know already, that the Brighton and Hove area has a large LGBT population and that many churches are accomodating to that population. That, however, is all it does tell us, and given that that’s something we’re already aware of, one wonders what the point really was.

On top of that, some of the language of the press release is pure hyperbole. For example, Dr Keith Sharpe is reported as saying,

There is clearly a vast gulf between the official views of Church leaders and the reality of the lived experience of gay Christians in actual congregations.Â  This must surely mean that in time the Church will have to recognise the full humanity of LGBT people.Â  These findings are of national significance.Â  The outcome is so overwhelmingly positive it cannot be dismissed as just a Brighton phenomenon.

Just ridiculous. No-one in the conservative camp denies the “full humanity” of LGBT people – this is just posturing. And as for the results of one town with a hugely disproportionate LGBT population when compared to the rest of the country being “of national significance” and “so overwhelmingly positive it cannot be dismissed as just a Brighton phenomenon”, well that’s just so ludicrous that it can be safely discounted. Seriously – such a small skewed sample can’t be taken as a viable indicator of the rest of the country, and to argue so just makes you look uninformed.

The most damning statement of misinterpretation however is this.

“A notable finding is that not a single church ticked the condemning box which represents the traditional teaching on homosexuality and which continues to be the official doctrine of the Church of England”.

Many of those who ticked (2) will have agreed with the official CofE doctrine and it is likely that even some who ticked (3) may have agreement with doctrine in principle, if not in practice. The only way to find out whether clergy do or don’t hold to the official doctrine of marriage is to ask them directly, without adding on a number of presumptions which this survey does.