A short but clear piece on the way that Jeffrey John tries to argue in the re-issued “Permanent, Faithful, Stable” that the Centurion and his “pais” are lovers. 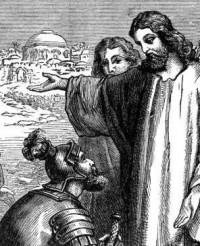 I have been reading the new edition of Jeffrey Johnâ€™s book, now titledÂ Permanent, Faithful, Stable, Christian Same-sex Marriage,in preparation for writing a couple of pieces on human sexuality. In the course of his discussion, Canon John makes brief reference to the miracle of the healing of the Centurionâ€™s servant in Lk. 7:1-10 // Mt. 8:5-13, and draws on Theissen and others to suggest that â€˜[a]ny Jew â€¦ would almost certainly have assumed they were gay lovers.â€™ (p. 14) On this basis, and because â€˜the possibility that the relationship was homosexual would not have escaped Jesus, Matthew or Lukeâ€™ (15), Canon John argues that â€˜it is a real question whether we are intended to see Jesus deliberately including a gay couple here as yet another category of the despised and rejectedâ€¦â€™ (15)

I had heard this line before, of course, although the argument that it fitted a pattern in the healing miracles of extending grace to the excluded was new to me. It occurred to me, though, that it was not a text commonly considered in the literature on theological accounts of human sexuality, and a quick search confirmed that: Stan Grenz noted that the argument had been made inÂ Welcoming but not Affirming; beyond that, as far as I could determine, silence. The text is not even treated in Robert Gagnonâ€™s compendiousÂ The Bible and Homosexual PracticeÂ (except for a note about God-fearers amongst the Gentiles, with the intervention of the elders in Lukeâ€™s version being held up as evidence.)

This story seems to play extensively â€“ along with the relationship of David and Jonathan (which gets a bit more discussion â€“ see both Grenz and Gagnon, or Eugene Rogers,Â Sexuality & the Christian Body,Â e.g.) â€“ in â€˜semi-popularâ€™ defences of the acceptance of faithful same-sex marriage in the church, at least in my hearing; given that, the silence of serious sources â€“ from any side of the debate â€“ is unfortunate.

It does seem clear, however, that neither account will stand up as a Biblical defence of faithful same-sex marriage. This is not because of the silence as to the precise relationship â€“ Grenzâ€™s point about the centurion, and Gagnonâ€™s point about David and Jonathan â€“ but because, even if we were to accept that the relationships were actively sexual, neither gets us anywhere near a picture of â€˜faithful same-sex marriageâ€™. Holding up David as an exemplar of any account of sexual ethics seems to me to be rather ambitious, given the details of his career; it is surely really very obvious that he was not someone who experienced exclusively same-sex erotic attraction and who was seeking a faithful and exclusive sexual relationship with another manâ€¦

As for the centurion, it is very plausible that a Roman centurion would engage in sexual intercourse with his slaves, both male and female; it was a standard way for a slave owner to assert control over his possessions. (There is an extensive literature on this.) Raping a slave to assert ownership and control is some distance from any Â ideals of Christian marriage I know of, however. Even if we hypothesise some sort of unusually affectionate relationship (Luke has the slave as â€˜preciousâ€™ -Â entimosÂ â€“ to his master), we have to insist that a properly loving relationship can never occur in the context of ownership â€“ we open the door to all sorts of horrific ethical possibilities otherwise.

This was exactly my critique when I wrote about the issue a few years ago.

Phang, in â€œThe Marriage of Roman Soldiersâ€ argues coherently that in the period of Roman history this passage occurs, it would have been inconceivable that a Roman soldier would have been permitted to have had a sexual relationship with either another soldier, any freeman, or even a male slave. There is however evidence that some Roman soldiers bought slave boys in order to have sex with them, but the documentation of this phenomenon is scarce. In some parts of the Empire at this time (i.e. Egypt) it was already unheard of for a free Roman to enter into pederasty with a junior. By the middle to end of the third century it was almost eliminated from the life of the army across the Empire.

So we are left with the possibility that theÂ paisÂ might be a male lover, but that if that is so then he would almost certainly be a pre-pubescent or teenage slave. This also raises the question as to whether theÂ paisÂ would have been a willing â€œloverâ€, as given that he had no choice in the matter we cannot automatically assume that he would have chosen such a position if he was free.

At this point then we are left with an uncomfortable dilemma, for if we wish to use this passage to affirm gay relationships then we might inadvertently be affirming pederasty and in particular, forced sexual activity on minors. Given that we already need to make an assumption thatÂ paisÂ in this context means male lover, the assumption that theÂ paisÂ is not a reciprocal equal is not unwarranted given our understanding of the cultural context of the first century.

Despite the obvious flaws in the argument, why do those like Dr John continue to peddle these weak “proofs”? More to the point, why do others fall for them hook line and sinker with no attempt at discernment?

33 Comments on “Steve Holmes on Pais”