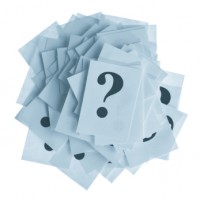 I’m not going to rehash all the arguments you’ve heard over the last 24 hours. Instead, let me simply ask some pertinent questions.

Can you think of any others?