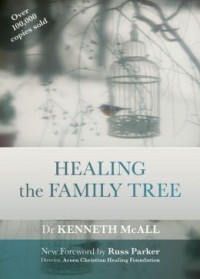 It’s rare that I find a book that I instantly want to finish as soon as I can, not because I want the experience over and done with as quickly as possible (I can think of a few of those) but rather because I want to mine its depths in as short a time as possible. I can think of only a few such books on my bookshelves and Healing the Family Tree is going to join them.

Dr Kenneth McAll’s thesis in thisÂ re-releaseÂ of a classic text is quite simple – celebrating the Eucharist with those who exhibit any number of spiritual and psychiatric problems and on behalf of those who have deceased without a ChristianÂ committal has powerful spiritual consequences. At first the notion seems bizarre, but McAll takes us through example after example of where this has been highly efficacious. The technique is simple – draw up a family tree of the person who requires healing today and go back through their family history to see if there are people who have died without being given a proper funeral. These can be adults or they can be unborn children (an interesting number of cases were of those related to babies who had been stillborn or miscarried). The person is named and that name written and placed on the altar in the context of the Eucharist and then the merits of Christ and his victory in Resurrection are proclaimed for the deceased in bread and wine. The effects in the lives of those in need of healing are often astonishing.

The idea of praying for the dead may at first beÂ abhorrentÂ to those from a more protestant tradition, but McAll is certainly not suggesting a practice similar to the Roman idea of attaining merit for those in purgatory. Rather, the emphasis is on providing closure and healing for those present today and to destroy and generational curses or wounding. The eternal fate of those who have died is already determined in the hands of Jesus long before any Eucharist takes place but there may be spiritual consequences of broken people dying without proper committal. Indeed, chains of occult practice or freemasonry or other manifestations of evil can linger on in family lines if the blood of Christ does not wash them away.

My experience of the idea of a Votive Eucharist began with the funeral of my godfather in Austria back in 1998. For the first time I began to see the merit in representing Christ’s victory for and on behalf of an individual or a specific purpose. If Christ’s victory on the cross is the most powerful and healing event in all history and if the Eucharist has been given to the Church as not only a thanksgiving for that victory but also a proclamation of it’s real presence in the community of those saved, why should it seem bizarre to declare Christ’s victory in the life of an individual. One of the most beautiful funerals I have ever been to was for the wife of a Roman Catholic friend in my last parish – it was an enormously joyous affair with the Mass at the centre of the service, celebrated and proclaimed as the real present sign of the hope that the deceased had died in.

Reading Healing the Family Tree makes me as a priest want to go out and perform such votive Eucharists. There is a sense that in certain parts of the Reformed Catholic tradition we have lost sight of the power of the proclamation of Christ’s victory in bread and wine, that in running away from erroneous doctrines like purgatory and transubstantiation we have also turned our backs on the hidden depths of this great Dominical sacrament.

A remarkable book with a remarkable inspiration for those who read it.

Do Buy ifâ€¦Â you want to explore aspects of the healing ministry centered in liturgical practice
Donâ€™t Buy ifâ€¦Â the idea of praying for the dead, even to bring healing for the living, is a complete non-starter