In all the controversy in Jersey, there is a possibility that charges may be laid against clergy on the island. In particular, Dame Steel’s Terms of Reference invite her to

Given this, I thought it would be interesting to explore under what mechanisms such disciplinary complaints could be made. 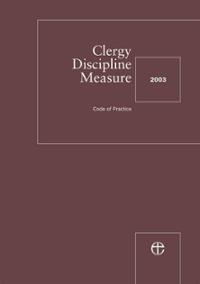 The disciplinary process is started by a formal written complaint of misconduct, which is made to the bishop (or archbishop, as the case may be).Â There are four grounds on which misconduct may be alleged, namely: acting in breach of ecclesiastical law; failing to do something which should have been done under ecclesiastical law; neglecting to perform or being inefficient in performing the duties of office; or engaging in conduct that is unbecoming or inappropriate to the office and work of the clergy.

Having received the registrar’s advice, the bishop may decide that it should be dismissed, in which case it will proceed no further under the Measure. If on the other hand the bishop considers that the complainant has a proper interest in complaining and that the complaint deserves further consideration, he will invite the priest or deacon about whom the complaint is made (‘the respondent’), to send a written answer verified by a statement of truth, together with evidence in support.Â The bishop will then decide which of five possible courses of action available to him under the Measure is the appropriate one to pursue. He can:

The vast majority of cases will be dealt with by the bishop of the relevant diocese. In the small minority of cases where the Designated Officer is asked to investigate, a report will be produced for the President of Tribunals, who will then decide whether there is a case to answer before a bishop’s disciplinary tribunal. Tribunals consist of two members in Holy Orders and two communicant lay members, plus an experienced lawyer in the chair.Â If a complaint is proved, the tribunal can impose the same range of penalties that a bishop can impose by consent, ranging from a rebuke to lifelong prohibition from exercising any ministerial functions.

All well and good. However, a problem lies in that the Clergy Discipline Measure 2003 doesÂ not apply to Jersey. Section 48(3)Â of the Measure says,

Next, the schedule attached to the 1931 Measure.

1. If and whenever the Bishop comes to the conclusion that a Measure ought to be applied either wholly or partly and either with or without variations to the Islands or either of them, he may prepare a draft scheme for the purpose.

3. The Bishop shall before the draft scheme is finally settled send particulars of what is proposed to be effected thereby to theÂ Lord Chancellor in order that they may be communicated to the States of the Island concerned, or of the Islands, as the case may be, for the ascertainment of their views thereon.

4.Â The scheme when finally settled shall be presented by the Bishop to theÂ General Synod, who may, by resolution, approve or reject it, but shall not have power to amend it. No such resolution shall be passed by theÂ General Synod unless the scheme to which it refers has been in the hands of its members for at leastÂ fifteen days.

The process to apply the Clergy Discipline Measure to Jersey (or indeed any Church of England Measure) is clear. The Bishop prepares a draft scheme in consultation with the Deanery Synod. The details of the Scheme are sent to the Lord Chancellor who informs the States of Jersey of the proposed change in order to ascertain their opinion. The scheme (amended as appropriate after any feedback) is then presented to General Synod who have to either accept or reject it. Once General Synod accept it it is sent back to the Lord Chancellor who presents it to the monarch (in this instance acting as the Duke of Normandy rather than the King/Queen of the United Kingdom).

This processÂ has been undertaken with respect to the Clergy Discipline Measure in relation to Guernsey. You can read the measure as presented for application in Guernsey here and the explanatory paper for General Synod here (excerpts below).

3. Although the Channel Islands falls within the jurisdiction of the Bishop of Winchester and are in the province of Canterbury, the CDM and the Legal Aid Measure do not automatically apply to the Islands.Â  Acts of Parliament do not apply to the Channel Islands save in very limited and exceptional cases, and the same principle applies to Measures of the General Synod which have the force and effect of Acts of Parliament when given Royal Assent.

11. As well as consulting the Deanery Synod of Guernsey and the States of Guernsey in accordance with the Channel Islands (Church Legislation) Measure 1931 and 1957, the Bishop of Winchester in preparing the draft scheme has worked closely with Her Majestyâ€™s Comptroller of Guernsey, and has also consulted the Clergy Discipline Commission (including the President of Tribunals), the Dean of the Arches, the Dean of Guernsey and theÂ  Legal Office of the National Church Institutions.

The guidance is interesting for two reasons. First, it explicitly reminds Synod that Acts of Parliament and Measures of SynodÂ do not apply to the Channel Islands. Second, it lays down an example of the framework outlined in the 1931 Measure being applied to implement the Clergy Discipline Measure on one of the Channel Islands. Interestingly, it explicitly informs Synod that the Guernsey Synod and the States of GuernseyÂ approved the measure in turn. The 1931 Measure does not say that the Deanery or States need to approve the draft Measure presented by the Bishop, but the indication is given in the guidance that given that the States and DeaneryÂ have approved the Measure it is an acceptable thing for Synod to pass the Measure. Indeed, on this basis the Measure as presented in 2006 was passed overwhelmingly.

So it seems pretty clear, both in the law itself and in precedent of the application of the law on this very Measure (Clergy Discipline) that the Clergy Discipline Measure does not at present apply to clergy in Jersey. This means that any charge against any clergy in Jersey would have to be undertaken under Section F of the Canons of the Church of England in Jersey which deal with discipline. These processes of discipline are utterly different to those outlined in the Clergy Discipline Measure, and I will examine them in a following blog post.

For the moment though, I am pretty clear in my mind that no charge could be laid on any Jersey clergy under the Church of England Clergy Discipline Process. Such an attempt would fail at the first point because any Registrar worth his salt would have to rule any such a charge out of order (and if he didn’t, I would anticipate a call for judicial review to overrule such a mistake).

Any thoughts? Do any of you have an alternate reading of the legislation and precedents which would allow a charge under the CDM against clergy in Jersey? Please add your comments below.

2 Comments on “Laying a Charge”