Advocates Person of the Year is now in Heterosexual Relationship 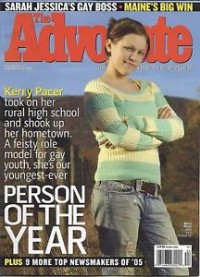 In 2005, The Advocate, a national homosexual magazine, named 17 year-old Kerry Pacer their â€œPerson of the Yearâ€ after she successfully took her fight to a U.S. District court to permit the formation of a gay-straight alliance club at her Georgia high school. She claimed it was needed to teach tolerance of lesbians, gays and transgender kids because she had been bullied after having â€œcome outâ€ when she was 12.

Fast-forward four years, and we now learn that Ms. Pacer is living happily withâ€¦. her boyfriend and their baby daughter. This real life story doesnâ€™t help the genetic argument for homosexuality. The champion of homosexual tolerance in Georgia high schools, self-declared lesbian and The Advocateâ€™s youngest â€œPerson of the Yearâ€ is straight. See the full storyÂ here.

Now, some of the rest of the story is a bit of a polemic against the “born gay” nonsense and that polemic unfortunately wants to suggest that homosexuality is purely environmental. Both of these positions are contrary to the best research evidence.

But the story does highlight the simple fact that sexuality is a lot more flexible than we think, especially female sexuality. Even before people set out to change their sexuality, there is a natural transition for some through different sexual identities. As I’ve documented here (and this is just a small selection of the better papers) there is clear evidence that many people who think they are one thing find that only a few years later they are the other. And interestingly, this happens with a much higher likelihood from gay to straight then the other way round, suggesting that heterosexuality is the centre around which other sexual identities vary.

And all this in the week that the ACC banned Sexual Orientation Change Efforts. If we know from countless pieces of research that sexual identity is fluid even when change is not sought, why do we have a problem with the idea of some people wanting to give that change a little nudge?