Back at the start of the “noughties” two papers were published that explored issues around Sexual Orientation Change Efforts (SOCE). The first, by Robert Spitzer who was part of the Task Force on the APA that removed homosexuality from the DSM was finally published in 2003, but was researched earlier. The second by Shidlo and Schroeder was released in 2002 and sees its tenth anniversary this year.

Spitzer’s paper has recently been in the news as he has sought to distance himself from his original conclusion. It’s interesting to note that many of the criticisms raised by Spitzer now about his conclusions then were highlighted a decade ago by activists such as Daniel Gonzalez, who has recently published a re-edited version of his original film looking at the Spitzer study. It’s worth ten minutes or so of your time watching what Gonzalez had to say then in the light of what Spitzer has said now.

We can summarise Gonzalez’s criticism as follows,

These are, let’s be fair, completely fair criticisms. Originally hailed as a survey that “proved” SOCE works, the reality is that such a paper simply proves that some people who participated in SOCE believed it worked. Ultimately there was, in the words of Spitzer himself, “Â no way to judge the credibility of subject reports of change in sexual orientation”.

All well and good. It is reasonable for critics to demand that ex-gay organisations no longer use Spitzer’s work to “prove” that gay people can change. The paper simply doesn’t prove that – it only proves that some people self-report that they change.

Got that? Let’s move on.

2002 saw the release of Shidlo and Schroeder’s paper on the harm of SOCE, entitled “Changing Sexual Orientation: A Consumersâ€™ Report”. Ten years later it is heralded by many as the definitive piece of work on the subject, cited by many professional organisations in their position papers on Reparative Therapy. For example, the UKCP references this paper, and this paper alone, in its public stance on the issue.

What did Shidlo and Scroeder report? They surveyed 202 people who had been through some form of SOCE (20 of which were women) and they asked them to report whether their therapy had helped or harmed them (or both). The results were interesting. Of the 168 who reported SOCE resulting in “failure”, 157 (so over 93%) reported some form of harm from the therapy. Of the 31 who were “successful”, 9 (29%) reported some harm.

At the same time however, both groups were also asked if the therapy had helped in anyway. 100% of the “successful” group said yes, but interestingly 81 of the “failures” (48%) also reported some form of help from the therapy they had undertaken.

Aggregated, 38% of all those who responded said that SOCE had just led to harm, 14% just to help and 46% both help and harm. Even amongst those for whom SOCE was a failure, barely half (85) were bold enough to say that they hadn’t had any benefits from the therapy andÂ it had been harmful.

So what we are left with when we examine S&S carefully is a survey where even amongst those who said that SOCE only half said it was just a waste of time and harmful. Over 60% of the whole sample found that engaging in SOCE had brought some benefit to them. 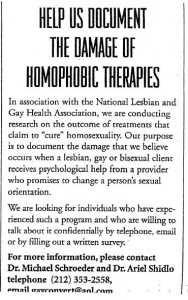 It’s worth stopping for a moment at this point and reflecting on same key points from the S&S methodology. Key factors in their approach were,

Now, at this point you might be suddenly wanting to scroll up the page to have another look at Daniel Gonzalez’s list of criticisms of Spitzer’s study. To save you the time, I’ll just provide a table right here so you can compare the two methodologies.

It strikes me that advocates of S&S 2002 cannotÂ be logically consistent if they (quite rightly) reject Spitzer 2003 on the basis of it’s methodology and then quote Shidlo and Schroeder 2002 on the subject of harm. If Spitzer’s methodology was flawed for only seeking participants who wanted to report success of SOCE, for asking them to recall events in the past which they might either falsely recall because of the passage of time OR because they wilfully wanted to misrepresent the truth of the outcome of therapy and for using only a telephone interview, then Shidlo and Schroeder’s methodology is equally so. One cannot reject one of the basis of methodology without rejecting the other.