Jersey to Canterbury (and Dover)

No, this post isn’t a travelogue but rather some news (or at least, telling you about some news that will soon be announced). 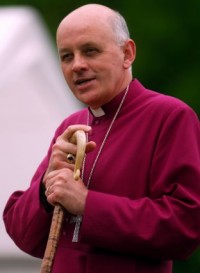 I understand that by the end of the month, Lambeth Palace will announce that Jersey is being moved pastorally into the care of the Archbishop of Canterbury. In practice, the Bishop of Dover in Canterbury, Trevor Wilmott, will be asked to assume temporary episcopal oversight of the island (and possibly Guernsey as well, though I haven’t been able to confirm this), effectively moving the island out of Winchester Diocese for the time being. There will then be another commission formed to try to untie the knotty canon law issues around Jersey having it’s own ecclesiastical law, with a view to these being sorted out before Jersey returns into the care of Winchester Diocese. As one source suggested to me, “no-one has any intention of overturning 500 years of history”. This seems to indicate that one notion being bandied around of forming a Diocese of the Channel Islands is no longer on the table and that reconciliation is the order of the day. The fact that the church in Jersey having effectively stopped paying parish share to Winchester has left a Â£500,000 hole in their budget is of course not insignificant in the thinking behind maintaining the island in the Diocese.

Before Trevor moved to Canterbury he was Bishop of Basingstoke in Winchester Diocese, so he is familiar with the particular canonical relationship between the mainland and Jersey. Together with Nigel Stock, Bishop in Lambeth, he visited Jersey last year on behalf of the Archbishop of Canterbury. He has a nickname of “Tricky Trevor”, and one source I spoke to last night said “Tim Dakin makes mistakes, tries to cover them up and fails, but Trevor is never seen to make a mistake. If there’s one man to sort out this mess, it’s Him”.

5 Comments on “Jersey to Canterbury (and Dover)”