Here’s the response from Uganda. 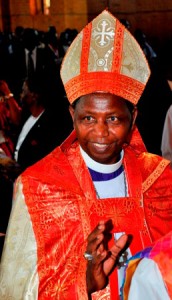 The Church of Uganda is encouraged by the work of Ugandaâ€™s Parliament in amending the Anti-Homosexuality Bill to remove the death penalty, to reduce sentencing guidelines through a principle of proportionality, and to remove the clause on reporting homosexual behaviour, as we had recommended in our 2010 position statement on the Bill. This frees our clergy and church leaders to fulfill the 2008 resolution of our House of Bishops to â€œoffer counseling, healing and prayer for people with homosexual disorientation, especially in our schools and other institutions of learning. The Church is a safe place for individuals, who are confused about their sexuality or struggling with sexual brokenness, to seek help and healing.â€

Accordingly, we are grateful for the reminder of the Archbishops of Canterbury and York to fulfill such commitments as stated in the 2005 Communique of the Primates Meeting held in Dromantine, Northern Ireland.

We would further like to remind them, as they lead their own church through the â€œfacilitated conversationsâ€ recommended by the Pilling Report, that the teaching of the Anglican Communion from the 1998 Lambeth Conference, from Resolution 1.10, still stands. It states that â€œhomosexual practice is incompatible with Scripture,â€ and the conference â€œcannot advise the legitimising or blessing of same sex unions nor ordaining those involved in same gender unions.â€

Furthermore, as our new Archbishop of Canterbury looks toward future Primates Meetings and a possible 2018 Lambeth Conference of Bishops, we would also like to remind him of the 2007 Primates Communique from Dar es Salaam, which says that there are â€œconsequences for the full participation of the Church in the life of the Communionâ€ for TEC and those Provinces which cannot

â€œMake an unequivocal common covenant that the Bishops will not authorize any Rite of Blessing for same-sex unions in their dioceses or throughâ€ their governing body;

â€œConfirmâ€¦that a candidate for episcopal orders living in a same-sex union shall not receive the necessary consent.â€

It is clear that the Episcopal Church in the USA and the Anglican Church of Canada have not upheld these commitments, and so we do pray for the Archbishop of Canterbury as he considers whether or not to extend invitations to their Primates for the next Primates Meeting or to their Bishops for the 2018 Lambeth Conference. To withhold these invitations would be a clear signal of his intention to lead and uphold theÂ fullnessÂ of the 1998 Lambeth Resolution 1.10.

The Most Rev. Stanley Ntagali

It’s actually a very good response. The Ugandans are saying that they are doing their best to practiceÂ all of what Lambeth 1998 1.10 asks, and so why are the Archbishops getting uppity with them? When was the last time they wrote a similar open letter to TEC and Canada to remind them of their doctrinal obligations under the same Lambeth resolution.

All well and good, and to be fair to the Church in Uganda, their response to the “anti-gay” Bill has been marked by a serious engagement with the pastoral issues it obviously raises. And of course, once you get past the loony left Changing Attitude argument that even holding to a traditional view of sexual relations is homophobic (a nonsense that the official Church of England position rejects), whilst Uganda could possibly be doing more openly to fulfil the other aspects of the resolution, in practice they are not Nigeria.

Nigeria is going to leap up and bite conservatives square in the arse on this issue. The new law there is blatantly draconian and unjust. Here’s what the Church Times reports today.

This month, the President of Nigeria, Goodluck Jonathan, signed the Same-Sex Marriage Prohibition Act in Nigeria, which entails a 14-year prison sentence for anyone found guilty of engaging in same-sex relationships, and states that anyone who “administers, witnesses, screens, abets and aids” a same-sex union can be imprisoned for ten years.

The UN High Commissioner for Human Rights, Navi Pillay, has said that she has “rarely…seen a piece of legislation that in so few paragraphs directly violates so many basic, universal human rights.”

This month, the President of Uganda, Yoweri Museveni, refused to sign the Anti-Homosexuality Bill, which provides for life imprisonment for homosexual acts.

On Monday, Davis Mac-iyalla, a gay Nigerian Anglican who has taken refuge in the UK after receiving death threats, said: “People are calling on Western religious leaders to please say something and talk to the African bishops who are publicly supporting these draconian laws.” Life was “very frightening” for LGBT people.

On Wednesday, Amnesty International’s Nigeria researcher, Makmid Kamara, said: “The Church and other religious groups have been very influential in supporting the passing of this Bill… If you can get very reputable religious leaders in the UK to speak out and reach out to the religious community, that would be a significant boost to the current calls being made inside and outside Nigeria.”

Now, I’m looking for a conservative who can justify to me how locking someone up for 14 years for engaging in an act of fornication is loving and kind and Gospel focussed. Really, explain it to me. The good news of Jesus Christ is that he can save you from your sins. So for someone who engages in fornication, the good news is that there is forgiveness and restitution and reconciliation with God. That is the Gospel. But I’ll tell you what the Gospel is not. It is not a social agenda that legislates for morality (for the Church exists in many places where it has no political power whatsoever and yet it grows just fine). It is not a conversion course to make you straight as a sign of transformation (because lust is sinful wherever it is directed, and we are not promised perfection this side of glory but rather strength to resist).

People come to Christ and repent of sexual sin because they see his power in other people’s lives and they hear the word of God preached as the Holy Spirit softens their heart and takes the scales off their eyes. They doÂ not come to Christ because some leading UK Christian spokespersons speaks at a conference saying there is a link between paedophilia and homosexuality and then refuses to answer emails from fellow conservatives asking her exactly what does she mean and can she provide some evidence to back up her claims. Seriously. People do not come to Christ through political rhetoric, they come to Christ through the preaching of the Word and the work of the Spirit.

And you know what my readers, it doesn’t matter if you can point to one Church who are trying to engage constructively in their country’s political processes to temper outrageous legislation if at the same time you refuse to criticise the other Church that is actively supporting a Bill that makes the first one look mild. Really, it doesn’t. If we genuinely want to offer good news to those who struggle with sexual temptation, let’s not condone throwing them into jail for over a decade if they fall, and let’s not say they’re linked to the evils of paedophilia if we want to be seen to offer a safe space for people to bring their brokenness.

Because if I was gay, or homosexual, or same-sex attracted or whatever you want to call me, the last people I want to go to for help are the ones who call me “queer”, agitate to have me thrown into jail for kissing another man and who say that “my kind” are just trying to get children into bed with them.

And you know what, don’t come back at me with “Well TEC and Canada bless gay relationships”. Yes they do, they’re a bunch of heretical apostates, but at least they don’t throw their clergy into jail just for disagreeing with them.

But hey, what would I know.