Certificate 15 post warning. All the 15+ stuff after the read more tag. 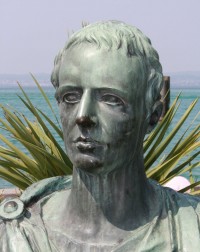 Catullus (Roman poet) indicates that he thinks of himself as gay or simply that he is offended by the suggestion that he is a bottom rather than a top (so being penetrated rather than the penetrator). This was linked to the post we had up yesterday about understandings of homosexual identity (or not) prior to the modern Western construct of “gay”.

Roman same-sex practice was essentially socially constructed. You took a male lover sometimes (and often a younger person) in addition to your female lovers, but there were clear social distinctions in who did what. If you were the socially superior then you penetrated. This explains the scandal when Nero took a male lover, not that he took a male lover but that he, the Emperor, allowed himself to be penetrated.

When you read Carmen 16 you see that Catullus is not saying “I am gay”, he’s saying “I am a penetrator – I get hard”. He is challenging (in poetry, for this is what pretentious poets do) the notion that he gets penetrated,Â not the notion that he is or isn’t gay. That idea simply didn’t come into it (and if you want to support such a notion you would need to present some other contextual material showing that the Romans had such a concept of sexual identity).

Here’s Carmen 16 in the Latin and then a good English translation. What do you think?

Iâ€™ll push your shit in and stuff your face–
Aurelius, you cocksucker; Furius, you little bitch–
since you think that my little poems
have gone soft and I must not be too upright!
Itâ€™s true; the devoted poet should stand erect
in his values, but not necessarily in his little
poems, which are truly witty and charming
when they’re a little soft, and not too stiff,
but can still cause a little tingling–
I don’t just mean for youth, but for hairy men
who can’t make their own loins stand upright!
You! You read about my “many kisses”
and doubt I’m fully a man?
Iâ€™ll push your shit in and stuff your face.

For those who are asking “Why this Peter?”, it’s actually really important in discussing sexual identity that we engage with how people viewed heir sexual identity down the years. There is a huge danger in importing our C21 western concepts onto ancient cultures, and in doing so missing out the actual subtleties of their experiences. It’s also important to understand the context of the Roman, Jewish and Hellenistic understandings of sexual identity when we engage with the Biblical passages on the issue.