Desperately trying to resist saying “I told you so”. 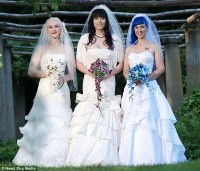 Doll, Kitten and Brynn, from Massachusetts, were joined together in a marriage-style ceremony last August and are expecting a daughter in July.

Kitten, 27, is pregnantÂ after undergoing IVF treatment using an anonymous sperm donor, and the trioÂ eventually plan to have three children – one for each of them.

The plan at the moment is that Kitten will bear all the children – possibly using her wives’ eggs and donated sperm – but they are open to other options, such as adoption.

Brynn, 34, says: ‘The hope is to have three kids altogether. We always joke that the children should never outnumber the parents.’

Doll, Kitten and Brynn Young married in a ceremony in August 2013, when each of their fathers walked them down the aisle. All three women wore white wedding gowns and exchanged rings.

Doll, 30, says: ‘As far as we know, there aren’t any other three women who are married like us.’

It was back in 2009 that Brynn first met Doll through an online dating site. Senior Software Designer and Engineer, Brynn had been married twice before to women and both experiences had made her acknowledge that monogamous relationships weren’t for her.

Meanwhile Fashion Designer, Doll had known that she was polygamous since high school. She explains: ‘I had always dated girls – who although they had boyfriends or girlfriends – were also allowed to date me.

‘I never thought that much about it and I had never really ‘come out’ as poly to my friends and family. To me, it was just how I was.’

Brynn and Doll dated for eight months before moving in together. Two years later, they purchased a house together.

Having both enjoyed polygamous relationships before, Doll and Brynn looked for a third woman to join them. After a few failed liaisons, Doll and Brynn created an OKCupid couple’s profile. Eventually, they received a message from Kitten.

Before meeting Doll and Brynn, Kitten had been in two long-term relationships with men. Her first relationship lasted ten years and she had been engaged to her second boyfriend.

Fashion Manager, Kitten says: ‘My second boyfriend and I had been together for several years but a few months before our wedding, he called the whole thing off without explanation. At first, I was distraught but now, I’m grateful for what he did.

‘I set up an OKCupid profile for myself and began dating an awesome woman with the happy consent of her husband. They were a lovely couple but we ended the relationship after I had to move away.

‘Soon after that amicable break-up, I came across Doll’s and Kitten’s OKCupid profile and saw they were looking for a third member to join their ‘Super Hero Group’.’

Oh what the hell. Told you so.

OK, so now the serious bit. They’re not actually legally married. Two of them are married and then they had a “hand-fasting” ceremony to bring them all together, accompanied by a binding legal agreement.

It all begs a few questions though.

Answers on a postcard…