Peter Ould Posted on December 24, 2015 Posted in Christmas, The Great Consummation No Comments

This post is based on a sermon preached at St Mary Bredin on the 3rd Sunday of Advent, 2015. You can hear the audio of the sermon here.

And Zechariah said to the angel, “How shall I know this? For I am an old man, and my wife is advanced in years”. And the angel answered him, “I am Gabriel. I stand in the presence of God, and I was sent to speak to you and to bring you this good news. And behold, you will be silent and unable to speak until the day that these things take place, because you did not believe my words, which will be fulfilled in their time.”

And Mary said to the angel, “How will this be, since I am a virgin?” And the angel answered her, “The Holy Spirit will come upon you, and the power of the Most High will overshadow you; therefore the child to be born will be called holy, the Son of God. And behold, your relative Elizabeth in her old age has also conceived a son, and this is the sixth month with her who was called barren. For nothing will be impossible with God.”

We take a break from our journey through Genesis to look at how a key portion of what we have explored so far is taken up at the start of the story of Jesus. Luke 1 has the angel Gabriel coming twice to folk in the Holy Land, first to a priest serving in the temple in Jerusalem and then to a betrothed virgin in the hinterland of Nazareth. The author weaves these two stories together in a linguistic thread that loops not just through those two visits but also back to the start of time.

At first the way that Zechariah and Mary respond to Gabriel seems to have only one point of connection – namely a questioning of the angel’s message. Zechariah challenges Gabriel on the basic biological facts of the matter (his wife is simply incapable of bearing children anymore) and Mary does the same (the simply statement that she has not had sex with anyone – an interesting comparison to Zechariah who clearly has been having sex with Elizabeth but without any reproductive results).

However, if we look at the literal translation of the two responses we see the subtlety that both connects and divides the old man and the young woman.

Now the subtlety in the text is much more apparent – Zechariah and Mary use the same root work – ginosko, “to know” but in remarkably different ways, and these are ways that we’ve seen before.

We’ve seen before how the temptation to know (to decide for ourselves rather than God what is good or evil) . This is the heart of the Fall, the core of sin, to usurp the sovereignty of God and to replace it with our own supremacy over our lives. Of course, this knowledge of humans means that the other knowing, the coming together of husband and wife, is corrupted and distorted and passes on the first sinful knowing. Look at the first child born in the world – Cain is not just the first human who results from two humans knowing each other, but he is also the first murderer, the archetype sinner. And after him every single human born through the knowledge of a man and a woman of each other will be tainted by that other knowledge that leads men and women away from God and into the hell of their own manufactured truth.

Now we return to the Nativity narratives with fresh eyes and see the differences between Zechariah and Mary’s responses to Gabriel. For Zechariah, the priest and holy man who is revered by his community for his service to God, Zechariah is still ultimately a sinner who is centred around himself. Zechariah’s response is still the first sinful knowledge, the demand for God to explain himself, the refusal to accept God’s statement via his messenger of his sovereignty over nature and the mysteries of conception. For this sin the holy man is disciplined for a while. 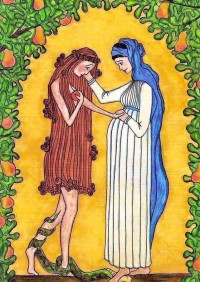 Mary on the other hand is the break in a chain of sin that has lasted for thousands of years – her response is not one of challenge to the message but rather surrender to it. She has not known anyone but still she responds “let it be to me according to your Word” and with those words the chain of knowing that passes on sin is broken. The Holy Spirit conceives within the blessed virgin a child who is not tainted by sin, who does not have passed onto him the curse of rebellion against God. The cycle of wrong knowing is broken and now light has come into the world, illuminating the rebels and destroying the darkness.

Thousands of years ago the child of the first Eve came into the world bringing with him the curse that his parents had passed on. Tonight we celebrate the birth of the child who breaks that cycle of false knowledge, the murderer finally replaced by the murdered one, the second Eve bringing forth the one who crushes the head of the serpent, an an Ark carrying the Word who destroys the power of our rebellious words and thoughts.

Eternal God,
in the stillness of this night
you sent your almighty Word
to pierce the world’s darkness with the light of salvation:
give to the earth the peace that we long for
and fill our hearts with the joy of heaven
through our Saviour, Jesus Christ.