The False Paradigm that Distorts our Discussions

I get into conversations all the time (for example today here) about how God moved me from homosexuality to a happy marriage (with baby on the way). I wrote back in the Spring what I personally meant by “post-gay” and I suggest that before you continue here you make sure that you’ve read that essay and that even if you don’t agree with it you understand what I’m trying to say there. 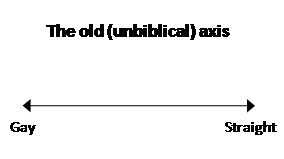 Part of the problem with this debate is that we’re discussing the wrong things. Take for example this diagram on the right (and I apologise right now for the poor quality, but I’ve yet to find a great freeware programme to do these kind of diagrams – ideas gratefully received). This is the way that the argument is normally phrased, that one is on an axis of gay to straight and that “healing” involves moving from the left to the right.

The problem I have with this bi-polar axis is that it is an entirely un-Biblical anthropology. The Bible has absolutely nothing to say about this bipolar description that seems to dominate our Western society. Furthermore, unlike sex or race we have absolutely no way of qualifying where someone is on this spectrum. There is no biological test that will tell you someone’s position on the scale. You can’t take a blood sample and explore the chromosomes or DNA to discover whether one is 95% gay or 22% heterosexual. It is entirely self-reporting and assumptive, yet this false paradigm of human anthropology dominates any discussion on the issue of same-sex practice and re-orientation.

Please note that this criticism of mine is not just aimed at those on the more liberal side of the theological discourse. This bi-polar model controls and distorts the argument of most traditionalists. They are equally prone to using these labels and wanting to describe change as a movement on this continuum. 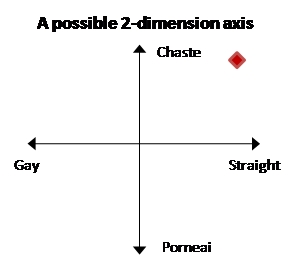 Let’s try and rectify that by putting in a y-axis and seeing whether that improves our picture. Now we have a 2-dimensional model that adds the dimension of chaste versus porneia. I want to use that specific word because Jesus (and other) clearly use it to cover all forms of sexual behaviour and practice that violate the intent of God for our sexual expression. Porneia covers (to use a clichÃ©) a multitude of sins from adultery (and sex outside of marriage) and homosexual practice to lust and promiscuity. Chastity indicates God’s desire for our active sexual expression – healthy married sex and nothing else.

Once again though we have a problem, because even in this model most traditionalists see the marked point on the diagram (the red diamond) as the area to aim for. This leads to disappointment and disillusion amongst many who enter the healing journey. “It’s not good enough to simply want to live a chaste life”, is what they hear. “What we really need for God to demonstrate he is at work is for a change in your orientation to occur”. Suddenly our second axis of sexual practice (“It’s not about orientation, but behaviour”) is relegated again to second place. The un-biblical bi-polar anthropology has reared its ugly had again and we are back where we started. 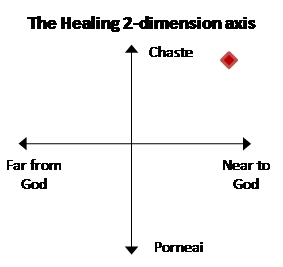 The solution to this (and the path to true healing) is to remove the bi-polar sexual orientation axis altogether from our model and replace it with something else entirely, something far more Biblical and eternal. Here then is the correct Healing 2-Dimension axis.

The red diamond is now in the right place and indicates the true desired destination. Notice straight away though that this new axis demonstrates something that many people miss – it is not good enough for us to simply call people to a life of chastity. One can live a chaste life but still be far from God, and in terms of the healing journey this is a detrimental situation. True healing and wholeness encourages both of these things and supports and nurtures them equally.

Note also that now our gay/straight spectrum has gone, one may be at the red diamond regardless of one’s sexual orientation. Where one is on the gay/straight spectrum isn’t in any sense an indicator of one’s progress on the journey of wholeness. In fact, it isn’t really an indicator of anything to do with one’s spiritual journey. It’s not a Christian descriptor in the slightest.

I’m often asked whether a bit of the Bible stuck out for me in my journey of healing. The answer is that it wasn’t any of the clobber passages on sexuality or healing. Rather, it was Galatians 3:28 that freed me from the constraints of “gay”. If you look carefully at that verse you’ll see clear anthropological markers that God uses to help us understand the differences among human beings (and therefore by their absence the descriptors that are not Godly).

In Christ, the verse states, there is neither male nor female. From this we see that human patriarchal separations between male and female are ungodly, but we also learn that those sexual distinctives are ones that are recognisable in front of God. God designed and created us male and female and as such we declare his glory, and we also declare his glory by fighting against and bringing down ungodly barriers between the sexes. Similarly, Jew and Greek are the same in Christ. Yes, their are racial differences and all the peoples and tribes will worship God together in front of the throne, but the human distinctions that we make between races are not of God and Christians like Martin Luther King Jr have been at the front of movements to eradicate them from within the church and without.

From Gal 3:28 we learn that slave and free are all the same in Christ, and so Christians have always worked for communities that include all economic strata and exclude none. Though Jesus told us that the poor would always be with us, men and women like Wilberforce have battled against forced bondage and in the 21st Century we continue the fight against the slavery of trade inequity and financial exploitation. These are struggles for justice that stem out of a clear exegesis of Scripture, not an attempt to create a loose theology of love that has no clear groundings.

Compare this then to the issue of sexuality. Does the Scripture say that in Christ there is neither gay nor straight? No. In fact the issue never arises because the anthropology of the Bible doesn’t address the issue. This is isn’t because its authors came from a time when such notions were intellectually and socially absent, but rather because they are not valid descriptors of human identity in the way that sex, race and economic existence are. Sexuality descriptors simply don’t fit into the way that human beings are designed to operate. Why? Because they are the emotive response to a fallen environment and not natural and god-ordained fundamentals of human existence.

Despite this though we let these labels dominate our thinking and our responses on this issue. Let me give you a clear example. I get asked time and time again what I think of when I make love to my wife. The question is normally posed by those on the liberal camp and the reason is that they are seeking to some how discredit my claim to have seen change in my life. they ask it waiting to pounce with the response “Aaah – you think of men so you’re really gay”. The answer to their question though is very simple – when I have sex with my wife I am thinking of how best to pleasure her. Interestingly enough, what I found was that as I did that I had a pleasurable experience as well – the attempt to turn on my wife turns me on (and it seems, vice-versa). Once I started having sex on the basis of the healing 2 dimensioned model above and not on the basis of my specific sexual attraction or emotional response I discovered the truth behind Paul’s command “husbands love your wife”. I wasn’t having sex on the basis of how it made me feel, or how I felt before we had sex,

For me that is true healing. It’s not about being more heterosexual then you were a year ago. Such a claim is rooted in that paradigm of sexual orientation that sidesteps God’s true intent for creation. True healing is when one lives closer and closer each day to God and when one’s life is lived according to his call upon it. In short, true healing is found in the pain of dying to self and resurrecting as the human God intended us to be, not the one that society prescribes us to be. It requires nothing more of us then to see Christ as he truly is – the Lord of all and one who tells us who we truly are, a radically different perspective to what the world tells us we are.

I hope and pray you will find such a healing in your life, that if you are reading this and struggling with your sexuality, that you will see that it is not a determinative thing in your life, that God calls you beyond it. Use the contact form on the website to get in touch if you need help or want to know more.

20 Comments on “The False Paradigm that Distorts our Discussions”