God, Gays and the Church – A Brief Review 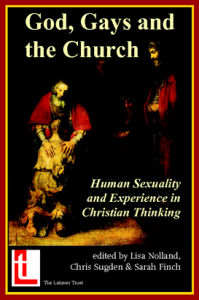 A number of people both on and off this blog have asked me repeatedly what my opinion of the book “God, Gays and the Church” is? As you know, the book was published on Wednesday and includes the first public version of my testimony. What I want to do in this post then is divide the book into “Good”, “Disappointing” and “Controversial”.

Before we do that however I want to make one thing very clear. All the contributors to the book were asked to submit pieces relevant as a response to the February 2007 General Synod debate on sexuality. Once we had contributed our piece there was minor editorial work to be done but to the best of my knowledge none of the contributors was in any way aware of the others’ contributions, nor were we asked to comment on them or endorse them. To suggest that if one contributes one essay to a book one implictly supports the others is ludicrous.

So, onto the brief review. Let’s start with…

The are a number of excellent contributions that are worth reading. The book begins with a number of testimonies of the power of God to both transform sexual orientation and also to allow the grace to live with same-sex attraction in a holy, celibate manner. These should be read and accepted as what they are – true stories of God’s Spirit at work in the life of many. They demonstrate the anecdotal evidence of what Dr Whitehead later outlines in his chapter, namely that the idea that homosexuality is hard-wired is a scientific myth with little evidence to support it. The chapter from Satinover is also good in that regard because it illustrates one hypothetical root into homosexual identity that many of us who have experienced it would identify with.

Professor Gagnon’s contribution is important because, as I repeatedly tell those who ask me my opinion on where the argument in the church should concentrate, the question of whether we as Christians should engage in homosexual practice is ultimately a theological/biblical one and not a sociological/biological one. If you haven’t already checked out Rob Gagnon’s website then do so. He is, in my humble opinion, one of the top conservative theologians in this area. His “The Bible and Homosexual Practice” is, along with Goddard and Walker’s “True Union in the Body” (available here as a free pdf download) the key biblical commentaries on this subject to be found.

Edith Humprey’s essay and Mario Bergner’s contribution are both excellent and thought-provoking pieces from recognised graceful conservative writers. In particular, Bergner shows once again that it is classic spiritual practice that is at the heart of any journey out of homosexuality. Likewise, Paul and Christine Perkin raise some key issues for Church of England conservatives in how we should respond to Civil Partnership legislation.

Lisa Nolland’s “Gay Wednesday, Gay Pain” is a very interesting examination of just where a large part of the gay Christian community is theologically at when it comes to sexual ethics. As she rightly points out, not just in her essay in the book but in her key note address to the book launch, groups like LGCM and Changing Attitude, far from promoting the gay equivalent of life-long marriage are often ready to support and condone fleeting relationships.

So, all in all, the book provides a number of excellent submissions that challenge and provoke us to grapple with the truth about sexual orientation and how we as Anglican Christians should respond.

Unfortunately the book is not all good. In particular there is one full contribution and sections of another contribution that, if I were the editor, I would not have included. The first is Dr Ronald Lee’s essay, “The Books, the Porn, the Truth”. While I can understand why Chris Sugden included it in the book, there are elements of Lee’s narrative that come across not as a graceful attempt to engage with a thorny issue, but as downright homophobic. While I have no issue with the idea that many gay men (and women) do live lives of promiscuity that would make even the most hardened sex addict blush, his claim that he has never met a monogamous same-sex couple makes me wonder whether he was looking hard enough. I personally have friends, some whom I’ve shared a flat with, who have gone on to enter into, and maintain to the best of my knowledge, the same-sex equivalent of monogamous marriage.

I remember talking to Peter Walker and Andrew Goddard about their production of “True Union”. They were adamant that they wanted to engage with the absolute best case pro-gay argument used by their liberal opponents. That is, I believe, what makes True Union such a great book because it engages with the absolute best theology the other side has, and demolishes that, not the straw men of promiscuity. Unfortunately Lee’s essay does no such thing, and though he makes some interesting points about the “facades” within aspects of gay culture, ultimately his piece leaves an uncomfortable taste in the mouth.

The other area of disappointment I found was the use by some of the contributors of outdated and discredited research. Unfortunately, in the prologue the editors cite the research of Paul Cameron on the age at death of non-HIV men, research that has been rejected by many (including ultimately myself after repeated challenges and suitable evidence to the contrary being presented on another blog site) as being unsound and statistically dubious. It remains to be said that the research of Hogg et al that they also cite in passing is perhaps a better starting point for exploring this area, but until some definitive study is completed on the subject, the jury is still very much out. There are also issues surrounding the character of Cameron himself that make one wonder whether it is wise to use his work in this regard.

Two areas of the book are controversial, not in the sense that they are offensive or poorly researched, but rather because they raise important issues that strike right to the heart of the current debate. The first are the submissions by Joseph Nicolosi on psychotherapeutic approaches to homosexuality. I know that a number of people who read these three chapters will find the content to be at odds to their understanding of sexual formation, but for many of us who have journeyed out of the homosexuality Nicolosi’s insights concur with our own experiences. What is more controversial however is when you present such a picture of psychological formation to someone who has tried the “ex-gay” path and found it not to work. The challenge that Nicolosi and others need to answer is whether the path that they outline is something that will work for everyone or only some? If only some, then is it worth resting our argument in such approaches or rather should we be emphasising the biblical call to chastity and accompanying that with an approach that relies more on classical spiritual discipline than psychotherapy? Answers on a postcard.

The other area that some will find controversial is Lisa Nolland’s essay on the sexualisation of youth. Read together with her key note speech, her criticism of homosexual behaviour as being at the forefront of the emergence of plastic sexuality is likely to cause you to sit and think, whatever your perspective on the subject is. I guess what might cause the most concern from some is how Lisa links the liberalisation of homosexual and other practices to the future trending of increasingly immoral and dangerous sexual practices, paedophilia and beastiality being but two. I’m not sure she necessarily makes the link that some assume she does that homosexuals themselves are at the vanguard of this, but some have takenÂ  her to mean exactly such a thing. I think that’s a little unfair and to presuppose that Nolland is engaging in innuendo at this point is to stretch the point too far. I would be interested from more liberal readers who, once they’ve read Nolland’s essay, think her thesis of the danger of the increasing sexualisation of our culture has anything going for it, even removing the placing of homosexual practice at the centre of his argument?

God, Gays and the Church isn’t half as bad as some are making it out to be, but neither is it completely a perfect offering, but then few edited compendiums ever are. What it certainly is is a challenging, if at some times controversial, engagement with the 2007 General Synod debate that deserves to be read widely and responded to appropriately. While some may choose to criticise the more obvious targets in the book, their failure to diminish the contribution of the vast majority of the essays will be a sign that God, Gays and the Church has made a serious input into our current debate on homosexuality in the Church of England and the wider Anglican Communion.

24 Comments on “God, Gays and the Church – A Brief Review”