As you can see from the graphic on the right, next Monday and Tuesday are the crunch moments for the Human Embryology Bill. There are four crucial votes o

n matters of deep theological significance related to our understanding of the sanctity of life.

I wrote a piece two months ago outlining some of the moral objections that Catholic Apostolic Christians have to elements of the bill. Cranmer has also written an excellent objection this morning to the same fundamental issues:

Cranmer does not read The Tablet for all manner of obvious reasons, but a communicant has drawn his attention to an article which warns of the unreliability of the of claims made for the research benefits of human-animal hybrid embryos, which is undoubtedly one of the most repugnant elements in the Human Fertilisation and Embryology Bill.

This Bill is presently making its inexorable way onto the statute books, with the support of many of those Roman Catholics who had featured in the media for their strident opposition, except for Ruth Kelly, who absented herself from the Chamber when the vote was taken. Courage of conviction was never one of her fortes. It is a good job she is not contending against Robert Mugabe, in whose regime people of real conviction are suffering appalling persecution.

Here’s the main problem with the Bill. So far, the only bits of embryology research that have provided any success in terms of developing usable treatments for various ailments are experiments with adult stem cells. There are no recorded cases to the best of my knowledge of any treatment developed from embryonic stem cells.

That’s what makes the Bill so ludicrous. It’s not as if the scientific community is coming to this saying "Look, we’ve had real success with the limited number of embryonic stem cell experiments we’ve done. We’re confident that if we expand the work we can provide even more cures". No, what they’re actually saying is "We have simply no evidence that experiments on embryos will provide us with one single cure, we have a much higher success rate using adult stem cells, but please allow us to create human beings simply for the purpose of tearing apart in petri dishes on the off chance that we might actually find something useful, not that so far we’ve been in the slightest bit succesful". Here’s what the piece in this week’s Tablet says:

Not a single patient has been treated, even in trials, with embryonic stem cells: it would be too dangerous.

Medically, these heavily camouflaged truths are hardly surprising. The facts speak for themselves. Embryonic stem cells have an innate and invariable propensity to form tumours. They have genetic and chromosomal instabilities and abnormalities. Donor-derived cells carry the serious double hazards of cross-infection (prion diseases, for example) and tissue incompatibility (rejection). It is impossible to envisage their use in patients in the foreseeable future. Three months ago the highly reputable New England Journal of Medicine – previously a stout defender of cloning and embryonic stem-cell research – lamented: "Perhaps, not surprisingly, the technical difficulties and ethical complexities of this approach [cloned human embryonic stem cells] were always likely to render it impractical."

The same principle goes for Saviour Siblings. What the government is proposing is tantamount to slavery – the creation of another human being not for simple sake of creating a life out of an expression of love, but simply to serve as a servant to another. Let me remind you what that actually is:

On Tuesday, the Commons will debate the idea of removing the need for a father. I blogged a while back on the way this is an attempt to create biological fiction:

What the Bill will do is allow a lesbian couple to engage in IVF treatment and, whether the sperm comes from an anonymous donor or someone who they know, allow them to have both the mother of the child and her female partner listed as the two parents on the birth certificate. That is a biological nonsense.

A birth certificate is not about listing who the two people who raise a child are. If it were then everytime a child inherited a new step-parent you would have to take their birth certificate, erase the old parent and write in the new. The Tipp-ex company would have a field day with its profits and the civil service would be run off its feet. But of course we don’t do that because in the UK a birth certificate is a statement of biological fact. It simply states very clearly who the father of the child is and who the mother is. Where the identity of either parent is unknown then the space is left blank (and that happens these days more than you would think).

But imagine if you were a woman who gave birth and when you went to register the birth you said that the father of the child was "Sir Winston Churchill, former Prime Minister of the United Kingdom". Do you think that the registrar would sign the certificate as a true and accurate record of the parentage of the new child? Do you heck. Winston Churchill has been dead for over 40 years and to the best of my knowledge the idea that he froze his sperm before death and the mother in question has used that for impregnation is slightly far-fetched. The bottom-line would be that to claim Churchill as the biological parent of the child would be a bare-faced lie and nothing more.

And just before I get the usual round of allegations of homophobia, let’s be clear that this has nothing to do with the validity of homosexual parenting. Many homosexual parents do a fantastic job of reaising their children and should be applauded for it. Others adopt and bring up boys and girls who might otherwise have no home – once again I salute them. But in all these situations there is no pretence that the homosexual couple were both the biological sires of the children in question.

You see, I dropped biology at school when I was 15, but even my scientific dullard brain knows that this is sexual nonsense of the highest order. What is proposed is nothing less than a genetic fiction, a pretence of biology to suit a societal mindsight. In an attempt to promote a new ethic of human relationships (you can screw who you want, when you want, and it’s OK) it is "equal opportunities" gone mad. Ultimately though, in rejecting biological truth and fictionalising pedigrees, it is a huge swipe at God, for the law attempts to deny how he has created human beings and in its place create a new fantastical truth about relationships and nature.

Understand very well – this clause has nothing to do with embryology or research and everything to do with a particular post-modern sociological agenda that wants to completely redefine the structures of our societies from the past two thousand years. It has nothing to do with what is good for the child and everything to do with the "rights" of liberal adults who reject any form of authority beyond themselves. This clause is the ultimate "I am God and I choose what is true" section of the Bill. Of all the sections it is the most frightening because it is a bold-faced attempt to deny scientific fact – namely that human beings are created by a male and a female. Mustapha Mond would be proud.

Finally, there is the section on liberalising abortion, at a time when the UK already has one of the most liberal child murder laws in Europe. Let me give you a simple clear reason why I am opposed to abortion for any reason apart from where the life of the mother is physically in danger. 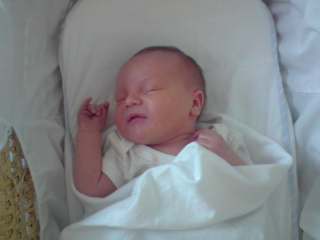 Yup, it’s the same child peeps. What’s the difference? On the left hand side he was 20 weeks old, able to feel pain, heart pumping, responding to external stimuli and completely dependable on his mother for food and nurture. The only difference on the right hand side was that he was 20 weeks older and that Gayle can’t now murder him if she just isn’t arsed to look after him.

If you still haven’t written to your MP email him or her now. Implore them to consider the real evidence on embryo stem cells, on the morality of saviour siblings and removing the need for a father, despite all the evidence showing that natural biological parents are the best for children.

An Australian study of more than 900 coronial inquiries into child deaths from violence or accident appears to bear out theories of the so-called Cinderella effect.

Psychologist and researcher at Melbourne’s Deakin University Greg Tooley said that despite sensitivities over the issue, the findings should not be ignored and child-welfare agencies needed to take it into account when assessing at-risk cases.

"It would be very good, I think, if an awareness of this were to lead to better targeted interventions," Dr Tooley told The Australian.

It was possible that sensitivities over targeting children with step-parents might be getting in the way of agencies identifying it as a risk factor, he said.

"It is certainly difficult to talk about because it is such a hot issue," he said.

Dr Tooley’s study found that children with a step-parent were at least 17 times more likely to die from intentional violence or accident. A limited version of the study found that the rate could be as high as 77 times.

It found the risk was higher if there were no biological parents, such children being at least 22 times more prone. Most at risk were children under five.

Let me summarise – a child who spends his first five years with an adult who is NOT his biological parent is many times more likely to be at risk than a child who grows up with both or just one (and no extra adults) of his true parents.

That my friends is clear science and statistics, not the nonsense on embryo stem cells that so far has produced not a single shred of evidence that research on such children produces any benefit.

Please join the many of us praying over the next few days that the UK will not take another step down the road to the worship of Molech.