Seeing Christ in the Old Testament 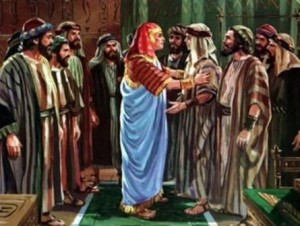 This morning’s readings gave us another example from Genesis of how Christ and the truth of what he achieved on the cross is already being laid out for us in Torah. Our small staff group reading and prayingÂ  together have already seen the promise of Messiah in Genesis 3, Melchizedek (who is the one without days) as the priestly king, Isaac as the only son sacrificed (and the ram as the substitute) to name but a few. Now we have the story of Joseph and specifically today the story of Benjamin (Gen 44:1-17).

Now of course Joseph is a clear type of Christ. He goes down into the pit (which is Biblical imagery of death), his cloak is covered in blood, and yet he comes back from the death twice (firstly by being sold rather than killed, secondly by coming out of prison to become the second most powerful man in Egypt). Resurrection motifs if ever there were any, and add to that the fact that the “death” (in the pit and then selling him) that is meant to destroy Joseph actually becomes the means of salvation for the brothers when Joseph is in the exact right place to save them years later.

And so to this morning’s reading. Joseph gets his Steward to put his silver cup in Benjamin’s sack and set the brothers up. Sure enough, the brothers set off home and sure enough Benjamin’s “theft” is accused. There then follows this curious exchange where the Steward seems to not hear what the brothers say.

Is the Steward a bit deaf, or is there more going on here then appears at first sight? Well a look at the Hebrew helps to clarify, because the literal translation is “And I say moreover now, like the words you said, …”. What the Steward says in not so many words is “You’re right that there will be punishment, but not quite as you propose. The guilty will become a slave, the innocent will go free”. Then the sacks are opened and the cup is discovered, and the brothers tear their clothes, in their despair echoing the same actions displayed by Reuben in Gen 37:29 on discovering that Joseph has been sold. Are the brothers about to bring pain to their father again?

Throwing themselves at the feet of Joseph, they repeat their offer that they gave to the Steward – Benjamin should die and they should become slaves. It seems clear now that the loss of another of Jacob’s sons has brought them to the point of contrition – there is a real sense that they are now atoning for their previous sin of as good as killing Joseph. Indeed, in verse 20 they declare Joseph to be dead, though of course they sold him into slavery for twenty shekels.

So the picture is this – all the brothers apart from Benjamin, the ones who are guilty of “killing” Joseph, offer themselves as slaves and offer Benjamin’s (“Son of my right hand” – the right hand being the place of authority) very life to atone not just for the theft of the cup, but deeper still for their crime of disposing of their father’s favourite son. Joseph however changes the terms of the deal and instead makes the punishments relevant to the prior crime of trying to kill him, but with a twist – the ones who are guilty (the brothers who sold him) go free, the one who is innocent (Benjamin) becomes a slave.

Judah knows though that this solution will kill his father Jacob. He simply will not be able to cope if the second of the two sons that Rachel bore him is also taken from him. Judah pleads that he guaranteed Benjamin’s safety to Jacob and now he simply cannot go back to face him with the news that his second favourite son has also been lost while he, as the oldest brother, was yet again in charge. He finally fully admits his guilt to the earlier crime and the scene is set for a gracious solution.

Clearly Benjamin is a substitute for Joseph, but as long as he remains Joseph’s captive he is also a penal substitute forÂ  the other brothers. He takes the punishment (slavery) that should go to Reuben and the others, and it is exactly the same fate that they inflicted upon Joseph those many years ago. That sin has now come full circle and yet the events speak beyond simply the saga of 12 brothers and instead broadcast the truth of atonement on the cross. Sins are revealed and confessed and justly recognised punishments are laid upon a substitute who is himself a symbol of love (Rachel’s son) and divine holy authority (“Son of my right hand”). And then, to complete the Christ motif, Joseph is physically resurrected in front of his brothers at the beginning of chapter 45. Intimacy is restored horizontally (Gen 45:4) and vertically (Gen 46:29). Redemption is complete as the family is restored in its entirety and broken relationships healed in the atmosphere of repentance and forgiveness.

It’s actually not at all hard to see this typology, but the interesting thing is that most of these types rest on the understanding that the atonement is primarily substitutionary and penal. If you don’t accept that, then Scripture becomes a dead book rather than a living word. Take as an example these two quotations. The first is from Jonathan Hagger’s sermon on Sunday:

Now, there is something very important that we need to bear in mind here. The terrible things that happened to Jesus at the end of his life were the result of human actions. They were not engineered by God.

Yet it was the will of the LORD to crush him; he has put him to grief;
when his soul makes an offering for guilt, he shall see his offspring; he shall prolong his days;

As they say, there are none so blind as refuse to see.