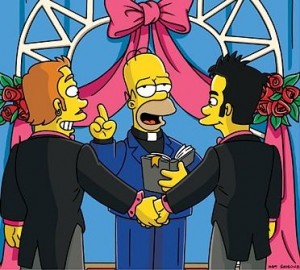 Thinking Anglicans have a number of links, the best of which are the reports from the Times,

The House of Lords voted to lift the ban on civil partnership ceremonies in churches and other religious premises last night.

Peers voted by 95 to 21 – a majority of 74 – to lift the ban which previously prevented gays and lesbians from getting â€œmarriedâ€ in such places.

In a letter to The Times ten days ago, senior bishops including the Bishop of Salisbury and the Dean of Southwark expressed their support for the amendment, which was tabled by gay Labour peer Lord Alli.

The move will result in an amendment to the Equalities Bill which would allow, though not compel, religious organisations to host civil partnerships. Religious language would also be permitted within the ceremonies.

It is predicted that as a result there would be effectively no difference between marriage and civil partnership within the church. Critics say that the change will force clerics to take a more liberal approach to same-sex relationships.

The law would allow ceremonies only among denominations who endorse gay marriage. The Quakers have already campaigned for the change in legislation, and Unitarians and liberal Jews have also already shown their support for the amendment.

and from the Telegraph.

She added that the Quakers and some liberal Jewish synagogues had expressed an interest in conducting services for homosexual couples.

A Government spokesman said that a decision had yet to be taken over whether MPs would also be allowed to vote with their conscience when the Bill comes back before the Commons in the next few weeks.

A number of observations.

The whole debate can be read here.

To summarise, the amendment leaves a number of questions unanswered and the Government has recognised these. They have also stated very clearly the fact that this is in their view, not in any sense a human rights or justice issue. The Bill still has to have a third reading in both houses and the amendment may very well fail at that point, or die with the Bill in its entirety if legislation is dumped in advance of the General Election.

One thing is clear though – this is legalised gay marriage in church by the back door and those of us who are Biblically conservative need to be very aware of what is going on. The Bill in its current form is too ambiguous and would arguably permit Church of England clergy to let Civil Partnerships be registered in churches without the permission of their Bishops.

Update – Colin Coward of Changing Attitude does a good job of being brutally honest about the amendment.

Is Lord Alliâ€™s amendment a Trojan horse as some claim? I very much hope so. There are many priests and parishes where civil partnerships are already celebrated and blessed in church and bishops who either turn a blind eye towards what is happening or positively encourage priests to contract a civil partnership. Conservatives would be surprised to know which bishops and how many there are.

Conservatives are now attempting to close the stable door well after the same-sex mare and stallion couples have bolted. Our bishops are in disarray, but not enough disarray as yet. Too many of them are still in the closet or in denial about their attitude towards gay relationships, or half in/half out of the stable.