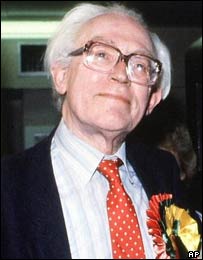 On June 9th 1983 I was but a slip of a lad and my family were driving back from a holiday in Austria. As we stopped overnight with family in Bavaria, my Dad issued the immortal line – “If Labour win the election then we’re not going back”.

He meant it. At the peak of his political career, the Michael Foot led Labour party produced a manifesto that was the epitome of centralist socialism. They expected the British public to lap it up after four years of Monetarism. The reality was an absolute disaster for Labour at the polls with their lowest share of the vote and seats in Parliament for decades. Michael Foot’s leadership led eventually to New Labour, as men like Kinnock, Mandelson and Blair woke up and smelt the (red) roses.

But the thing Michael Foot will forever be famous for that year is the treatment he got from Kenny Everett at the Conservative Party Conference. As far as I’m concerned, the greatest sign that you have reached the pinnacle of your career is if you become the focus of the leading comedians’ humour. Political satire is one of the things we do terrifically well in this country, so here are two contrasting videos of highlights in the career of one of Labour’s most iconic figures of the twentieth century. Here’s to the author of “the Longest Suicide Note in History“. You almost made this half-Austrian become German (which is like telling someone from Glasgow he has to move to Chalfont St Giles).