There is one simple reason why I’m not just voting Conservative tomorrow but actually working hard to help elect an MP near to where I live. Here he is: 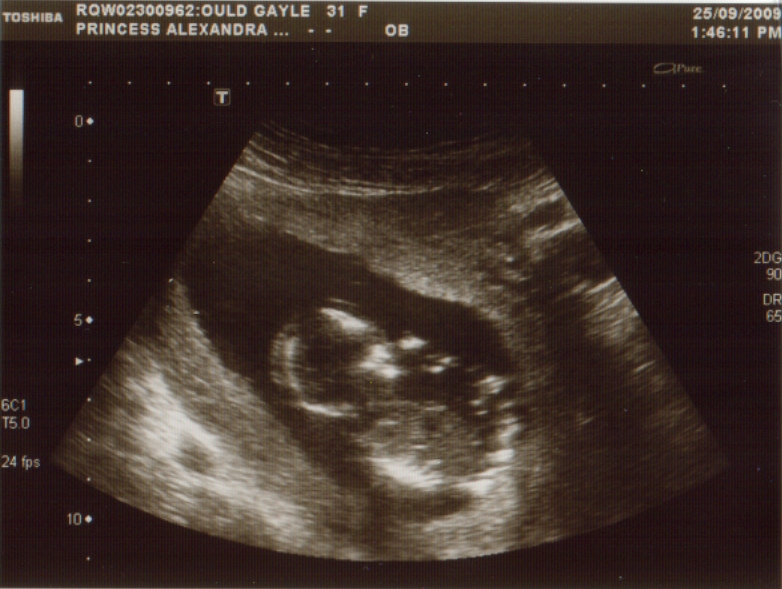 This is the last “official” picture of Zachary. He died around 17 weeks, his heart finally failing to provide for his body, every cell of his body corrupted by a genetic misfortune. We would have loved him to live, but it was not to be.

There is another picture of Zachary, but I’m not going to show it to you because I know it would distress some of you. It is a photo taken a few days after the one above, after Zachary was born. If you were to see that photo you would see his little hands and fingers. You would even be able to see which side of the family he was taking after. It is the photo of a little baby who died years before he should have. If you were to see that photo there is simply no way you could deny that he was a human being as much as you are.

Here’s the thing though – in our country today, every single day children like Zachary are murdered. Their mothers walk into abortion clinics and let someone kill their children. At the same time that parents like us are grieving the loss of their sons and daughters, other sons and daughters are being stamped out of existence simply because their parents cannot be bothered to fulfil their responsibilities.

That is wrong. It is immoral. It is evil. There is no other word to describe a society that murders its innocents because it cannot be bothered to look after them. Evil. Pure and utter unadulterated evil.

Two years ago Nadine Dorries attempted to steer through an amendment to the Human Fertilisation and Embryology Bill which would have reduced the age limit for abortions to 20 weeks. It was a sensible move, based on the clear clinical evidence of the viability of children at that point. There are enough examples of children born just a few days older then Zachary was when he died who have survived and are now fully healthy. It was a proposal built not on subjective opinions about when life begins or complicated arguments about blastocysts or embryonic fetuses, but rather based on simple clinical evidence.

The response from the Labour front bench was horrifying. Although Labour claimed to be allowing a free vote on the subject, Harriet Harman used her official role to speak against the move and then proceeded to whip Labour MPs through the “No” lobbies. In effect Labour voted to continue to kill babies simply because the parents could not be bothered to look after them.

In comparison, the leader of the Conservative Party David Cameron came out publicly in favour of a reduction in the limit on abortion to 20 weeks and has since come out publicly to once again promote such a proposal. Of all the three main party leaders, he is the only one who would vote to save the lives of innocent children, murdered because their parents think they can just discard the precious lives they have created.

That is why I am voting Conservative tomorrow. I am aware there are many other issues that we face as a nation – the national debt, immigration, the war in Afghanistan to name but a few. But surely the mark of a moral society is how it treats the most vulnerable in its midsts. On that basis I will not rest until we remove as many Labour MPs who voted in favour of maintaining the 24 week limit on murdering babies and replace them with what is a much more socially conservative slate of Conservative candidates who understand that so-called “freedom of choice” can never out-vote the sanctity of life.

I hope that you will join me tomorrow in doing the same – let’s vote in MPs who will stop the murder of babies. Let’s do it for children like Zachary who fought so hard to survive when others in other wombs are just trampled on and thrown out like pieces of rubbish instead of the precious Images of God that they truly are.

0 Comments on “Why I’m Voting Conservative”