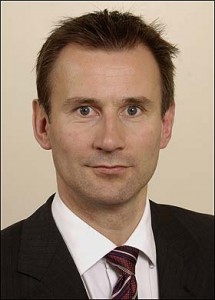 May I begin by congratulating you on your appointment as Secretary of State for Culture, Olympics, Media and Sport. I am delighted that you are serving under a new Prime Minister whose government promises to do much to overturn many of the mistakes of the past 13 years.

I am writing to ask you to use all your influence and statutory powers to intervene to prevent the broadcast of a TV advertisement this coming Monday (24th May 2010) at 10.10pm on Channel 4. As I am no doubt you are aware, this advertisement is produced by the leading provider of abortion services in this country – Marie Stopes International – a charity that turned over more that Â£60 million in 2008 from providing such services. The stated aim of the advertisement is to “help women make a more informed choice about their pregnancies and sexual health”.

The current BCAP code of practice indicates very clearly that such an advertisement would be in breach of the current regulations for TV advertising.

The Broadcast Committee of Advertising Practice (BCAP) indicated last year that it had put on hold plans to permit abortion advertisements on TV. In a statement they said “In March 2009, the Broadcast Committee of Advertising Practice (BCAP) consulted on a proposal to include a rule in the BCAP Advertising Code about post-conception advice services. In recent weeks, Ofcom and BCAP have identified some outstanding matters for further discussion on the proposal … Therefore, when the new Broadcast Advertising Code is published, the regulatory position for advertisements for post-conception advice services will remain unchanged.

Despite this claim however it appears that the TV advertisement from Marie Stopes Advertisement has been approved for broadcast. Even if it is the intention of BCAP to move to a new regulatory framework in September 2010 permitting such advertisements, the new framework is not yet in place and therefore cannot be applied to this advertisement.

I would therefore ask you to use all the powers of your office to ensure that OFCOM (which has contracted out its obligations to BCAP Ltd and ASA(B) Ltd) meets its statutory requirement under The Communications Act 2003 to ensure that “the inclusion of advertising which may be misleading, harmful or offensive in television and radio services is prevented” (Section 319(2)(h)). As I mention above, BCAP have indicated that they have no intention of changing the current code of practice. The Marie Stopes International TV advertisement clearly breaches this unchanged code of practice and should not be broadcast.