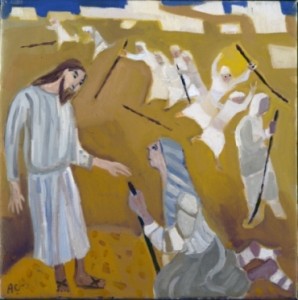 In response to a comment in a previous thread, I want to repost part of a piece I wrote two years ago in response to the Martin Dudley affair in London.

We are rapidly approaching the point where the traditional wing of the Church of England needs to work out what its priorities are. There is only so long that those who pastor in this area can continue without support to offer a place of safety and healing to those who have experienced all kinds of emotional and sexual brokenness. Either the Bishops and leaders of the large churches want to support this kind of work or it will simply not happen. If we are to prevent the same fate happening here that has happened in the USA then we need to provide not just a reasonable theological defence but much more vitally a practical pastoral solution. It is simply wrong for us to preach the sermons but not to do anything practical afterwards.

Last year I wrote a letter which was published in the Church Times in which I said the following:

In contrast to those who have seemingly dedicated their lives to rejecting the words of Scripture and are therefore obviously troubled by those who might call them to a holy life, many of us with same-sex attraction have lived simple, celibate lives in the full knowledge that the surrender of our desires to God is not â€œpsychological onslaughtâ€ but rather the path of grace. Some of us have then, by the mercy of God, moved from the single life to one of marriage as the church teaches and others have remained unmarried but content in a singleness that glorifies Christ in its surrender to him. Such a path is not without its struggles, but ultimately it is the journey that the Archbishop of Canterbury himself commends when in a recent interview he clearly stated â€œOur jobs mean we have to adhere to the bible, gay clergy who donâ€™t act upon their sexual preferences do, clergy in practicing homosexual relationships donâ€™t.â€.

The Churchâ€™s statements about healing, wholeness and pastoral care only ring hollow to so many because countless clergy up and down the breadth of this country do not in any way support the ministries of those like myself who seek to come alongside people struggling with issues of homosexuality and other sexual brokenness. Perhaps now is the time therefore for the Church and its Bishops to put its money where its mouth is and make specific diocesan stipendiary appointments of men and women who can encourage those with same-sex attraction to live a life faithful to the teachings of Scripture?

I stand by those words and today I wish to repeat them as a clarion call to the traditionalist community in this land to do more than just spout off everytime that some action takes place that they donâ€™t like. Although I agree with many of my traditionalist colleagues, I am frustrated that despite their godly abhorence of same-sex activity, they seem hugely reluctant to provide any form of material resource to help pastor those who struggle deeply in this area.

In England it is left down to very few of us to minister to those who find themselves attracted to those of the same-sex but believe on reading the Scriptures that they cannot engage in any relationship that would come from following through on such emotions. Often at personal expense, both materially and emotionally, the few of us involved in this ministry seek to help those who struggle, whether it is to aid them finding healing for the brokenness in their lives, or simply to provide support and encouragement in their day to day battle to live a celibate, god-fearing existence. We long to be able to reach out to more people and to help equip the church to do so, but our hands are tied by having other, stipendiary driven, priorities.

Why is this? Why are evangelical church leaders not willing to fund this work when their churches are flooded with other pastoral workers and woship leaders and youth specialists? Why are traditionalist anglo-catholic bishops not able to provide stipendiary diocesan roles for this vital task when their offices are sometimes over-burdened with a whole host of advisors and minor canons addressing this that and the other?

Could it be that we simply donâ€™t believe that God is able to support those who struggle in this area, that we arenâ€™t convinved he brings peace and healing into brokeness? Or might it be that we believe that all we have to do is tell someone to be celibate and happy about it and the jobâ€™s over? Or is it possible that we just donâ€™t want to stir the boat, that weâ€™re happy being seen as those who are theologically correct on this issue as long as no-one actually asks us to be pastorally responsible as well.

My great fear is that we will lose the battle in the Church of England on this issue, not because we do not read the Bible correctly, but that we have failed to carry out the call of Christ to bring his kingdom into being by offering the healing and transforming power of the cross. At least the liberals resource the heresy they believe. At the moment it appears that we in the traditionalist camp cannot materially support the truth.

I long to see a Church of England that puts its money where its mouth is. I long to see diocesan advisors on emotional healing and sexual freedom, funded by the church and backed by their bishop. When that happens the society we live in will know two things â€“ that the Church means what it says and that there is a place to go with your brokeness. At the moment though, all we are ultimately saying is that we donâ€™t like what youâ€™re doing, but we have nothing to offer you instead.

39 Comments on “Funding the Work”