Translation Issues of the Heidelberg Catechism

I’ve been reading some stuff on other websites around how two people have been interacting on the web, and in the course of that come across this interesting piece from two years ago in the Christian Post. 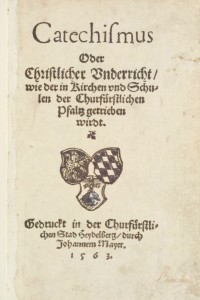 A committee in the Presbyterian Church (U.S.A.) approved on Monday changes to a translated version of a document of the Reformed Christian faith â€“ changes opponents say are a smokescreen effort to remove a negative reference to homosexual behavior.

PC(USA) commissioners and delegates at their biennial General Assembly went into nearly seven hours of debate on overtures, or resolutions, that called for changes to the 1962 Miller-Osterhaven translation of the Heidelberg Catechism. Much of the controversy revolved around a reference to “homosexual perversion” that is not found in the original German text.

Written in the 16th century, the Heidelberg Catechism has been translated in to many languages and the PC(USA) adopted in 1967 the Miller-Osterhaven version in its Book of Confessions. Opponents of the current translation say the original text and all subsequent translations do not contain any reference to homosexuality and are seeking for a more historically faithful and accurate translation.

“Q. 87. Can those who do not turn to God from their ungrateful, impenitent life be saved?

A. Certainly not! Scripture says, ‘Surely you know that the unjust will never come into possession of the kingdom of God. Make no mistake: no fornicator or idolater, none who are guilty either of adultery or of homosexual perversion, no thieves or grabbers or drunkards or slanderers or swindlers, will possess the kingdom of God.'”

In support of the current version, Dr. Robert A. J. Gagnon of Pittsburgh Theological Seminary argues that the original German text alludes to the Scripture passage 1 Corinthians 6:9-10 which, in the New English Bible translation, lists “homosexual perversion.”

“The spirit of the text of the Catechism is clear enough. It is the exact opposite of the attempt now being made to make the Confessions open to homosexual practice,” Gagnon said in a written argument last week. “The attempt at retranslation is not about history and honesty but ideology and a homosexualist agenda.”

“It is not the Latin and German texts from the sixteenth century that guide our Church, but rather it is the English texts adopted by the deliberative assemblies of the Church and published in the Book of Confessions by which every officer of our Church has vowed to be guided,” they said. “These English versions have been responsibly translated and carefully chosen as ‘faithful expositions of what Scripture teaches us to believe and do.'”

Can you see why this interests me?

The original Heidelberg Catechism was written in German in 1563. Question 87 in the original German reads

A literal translation would be:

Question: Can those who have not been made Â saved, from their own unthankful and impenitnent lives turn to God?
Answer: No way, because the Scripture says “No unchaste, idolator, oathbreaker, thief, miser, drunkard, blasphemer, robber and suchlike will inherit the Kingdom of God”

Now, that’s very clearly a reference to 1 Corinthians 6:9-11, but it misses out any words which could be a translation of arsenokoites or malakoi. And just to add to the mix, here’s that passage in the 1545 Luther Bible (which was used by the writers of the Heidelberg Catechism.

Neither the fornicator or the idolator or the oathbreaker or the weaklings or the child-desecraters or the thieves or the miser or the drunkard or the blasphemer or the robber will inherit the kingdom of God.

Of interest is that malakoi has been translated as “weakling” and “arsenokoites” as “child-desecraters”. This is a common 16th and 17th century translation of the words. I’ve covered my own opinion of the translation of malakoi and arsenokoites here and here and that’s well worth a moment of your time to read.

Back to the isue at hand. The 1545 Luther Bible rendering of 1 Cor 6:9-10 is very similar but not quite the same as the 87th answer in the Heidelberg catechism. For ease of comparison, let’s put them next to each other and see what the differences are.

It’s very easy now to see that the only thing missing from the Catechism is the controversial bits! And it’s very clear that although the original 1563 German version references 1 Cor 6:9,10; Eph 5:5,6 and 1 John 3:14, the list is very clearly taken only from the first of those passages.

Rob Gagnon, who is referenced in the original article, has this to say as to why the Catechism omits a translation of arsenokoites or malakoi.

As with the Catechism’s omission of the “covetous/greedy” and “swindlers/ robbers,” the omission of “sexually immoral persons [or: fornicators],” “soft men,” and “men who lie with a male” can have had nothing to do with a desire to affirm fornication, incest, sex with prostitutes, and homosexual practice. The only logical reason for sixteenth-century reformers to omit terms having to do with sexual immorality, especially homosexual practice, is that these behaviors were viewed as obscene and thus wholly inappropriate to mention, especially in a catechism that would be used to instruct children. Calvin himself, when he comments on Rom 1:26-27, 1 Cor 6:9, and Jude 7 in his commentaries, does so only in an oblique way, referring to desires and actions that are “monstrous,” “polluted,” “most filthy and detestable,” and “the most abominable.”[3] Even as late as the early twentieth century, the Loeb Classical Library published by Harvard University Press would routinely render Greek classical texts into Latin rather than English whenever coming across favorable discussions of homosexual practice. The reason: such material was regarded as obscene and likely to corrupt young minds.

So commissioning a new translation of the Heidelberg Confession for the obvious purpose of getting rid of any reference to “homosexual perversion” gets things precisely backwards; namely that the omission of the terms for homosexual practice in 1 Cor 6:9 is a reflection of how bad and obscene Ursinus and Olevianus, among all other reformers of the day, thought homosexual practice was.

That’s not a bad argument (and incidentally I have left in a hyperlink to a useful footnote). I would want to expand Gagnon’s argument in this piece and say that since the first word “Unchaste” (or “Fornicator”) is translated from the Greek pornoi which arguably covers all sexual practice outside of marriage, there is no need to specifically repeat “subsections” of pornoi (i.e. arsenokoites and malakoi).

You can see now what the argument is. The 1962 translation assumes that the reference is to 1 Cor 6:9-10 and therefore simply re-renders that in more modern language (for 1962). Putting aside what the exact translation of arsenokoites and malakoi should be, you can see the logic in what they have done. Those who argue that a new version is needed want to translate the original German text of the Catechism, regardless of whether it omits certain portions of the Scripture that it references.

FWIW, I think those who want to remove references to homosexuality are correct on the basis of accurate translation of the German into English, but Gagnon wins if the argument is more based around catching the *intent* of the original German and communicating that into modern English. Really, it’s just like comparing the ESV to the New Living Translation – one is a literal transliteration, the other communicates the original intent but without a literal rendition.