Homosexuality and the Christian 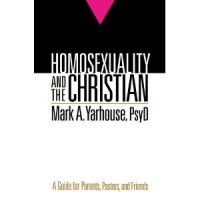 At first glance Mark’s new book is just more of the same – another book by another Evangelical about human sexuality. Mark Yarhouse has form in this area, including collaborating with Stanton Jones on the (ongoing) Ex-gay longitudinal study. This book however is not about proving a point but rather about helping to shift understanding in the Evangelical community about homosexuality and the church’s response.

It is in chapters two, three and four that Yarhouse sets out his position and challenges previously assumed truths amongst conservatives. Chapter two examines how gay identity in the modern western world is constructed primarily by a narrative that assumes that the emotions and attractions one experiences are valid. This leads the individual, after coming to terms with his sexuality, to integrate it into the core of his sense of self. Crucially an aspect of this is self-actualisation, where the emotions that have been integrated into the sense of self are validated by their physical expression.

Yarhouse then suggests an alternative Christian narrative which sees homosexual attraction along with other unwanted emotions to be viewed as aspects of the Fall. In this narrative the Christian identifies conditions, emotions and desires which would not be present were he to be perfect and untainted by the Fall. These fallen aspects (including homosexuality) are viewed as real but not prescriptive – they do not determine identity. The ground of being for a Christian is not his emotions but Christ, so Christ becomes the core of identity and the fallen parts are carried alongside that, recognised but not validated.

This perspective then shapes the next two chapters and does so in a manner that challenges many conservative assumptions. Yarhouse likens homosexuality to disability (eg blindness or genetic conditions) in terms of it being an aspect of the Fall. If we don’t tell a blind person that he needs to be able to see, why do we insist that those who have homosexual attractions should try to become straight? In chapter three Yarhouse explores the various theories for causation ofÂ homosexualityÂ (or homosexualities as Yarhouse points out, for same-sex attraction takes a number of forms and is very likely caused by a number of different variant things in different people). The conclusion of this chapter, after a reasonable grappling with the latest research which suggests a complicated mix of nature and nurture, is “so what”. So what if homosexuality is genetic – that would not validate it as a good thing. Certainly the evidence that it is only an emotional relational issue and has no roots in biology is very small, which should make us mildly cautious of attempts to “fix it”. Equally though there are a number of other conditions that are biological that are not automatically moral, things that we would want to alter.

And this leads us to chapter four, examining sexual orientation change. In some senses this chapter is the real ground-breaking territory, as Yarhouse brings us some of the results of his ongoing study in this area. The crucial fact that emerges is that those who went through various programmes “successfully” did notÂ necessarilyÂ see a great switch from gay toÂ straightÂ (though they did see some movement along that spectrum). What was significant though was that many of the participants established a much deeper and more profoundÂ relationshipÂ with God, and this, rather than the orientation change per se, was the key to them being able to move forward. In this sense sexual orientation is not the crucial issue for Christians – rather it is sexual identity.

Of course, this is hugely challenging to the Church.

The other group of Christians we studied seemed to begin and end with their religious beliefs and values about homosexuality. They did not experience homosexuality as who they really were; many thought of it as an expression of the fall, much like some people are susceptible to diabetes or cancer orÂ depressionÂ or anxiety or alcoholism. In framing the issue this way they reject the discovery metaphor.

What was really important to this group was living in God’s will. For them, same-sex behaviour did not reflect God’s intention for sexual expression. So forming a gay identity around attractions that led to homosexual behaviour would not be good.

But the church can be an obstacle if it pushes a simplistic expectation of change, by which I mean the expectation of a complete and categorical switch from homosexuality to heterosexuality as though it were the direct result of putting forth enough effort or having sufficient faith.

It seems that what Yarhouse is proposing is that if support groups continue their work in helping those with same-sexÂ attractionÂ who don’t want to establish a gay identity, there must be less of an emphasis on prescribing a particular path to freedom involving orientation change and more of a focus on what it means to die to self and rise in Christ. Orientation change *may* occur but it should never be the focus of intent. Rather, every Christian should be concerned withÂ howÂ to live with the fallen aspects of the self in the light of the unrealised eschatology today’s church currently inhabits. In very many senses course like “Living Waters” and traditionalÂ spiritualÂ exercises such as the Ignatian tradition already in part provide such tools, and material such as the Neil Anderson based Freedom in Christ course cover this ground as well.

The last words are Mark Yarhouse’s

When each of us [pursues a life in Christ], we begin to taste some of our future, some of what we are all moving toward as followers of Christ. Our purpose is to praise God, to savor God, to glorify God; that is the believer’s essential orientation and identity.

16 Comments on “Homosexuality and the Christian”