December is an interesting month in the Anglican liturgical cycle. As well as the obvious stuff around Advent and Christmas, there are also some interesting combinations of saints days and lesser feasts. Take this week for example. We began yesterday with St Nicholas of Myra who gives us an excellent example of dealing with heretics. 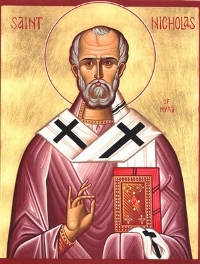 In AD 325 Emperor Constantine convened the Council of Nicaea, the very first ecumenical council. More than 300 bishops came from all over the Christian world to debate the nature of the Holy Trinity. It was one of the early church’s most intense theological questions. Arius, from Egypt, was teaching that Jesus the Son was not equal to God the Father. Arius forcefully argued his position at length. The bishops listened respectfully.

As Arius vigorously continued, Nicholas became more and more agitated. Finally, he could no longerÂ bearÂ what he believed was essential being attacked. The outraged Nicholas got up, crossed the room, and slapped Arius across the face! The bishops were shocked. It was unbelievable that a bishop would lose control and be so hotheaded in such a solemn assembly. They brought Nicholas to Constantine. Constantine said even though it was illegal for anyone to strike another in his presence, in this case, the bishops themselves must determine the punishment.

The bishops stripped Nicholas of his bishop’s garments, chained him, and threw him into jail. That would keep Nicholas away from the meeting. When the Council ended a final decision would be made about his future.

Nicholas was ashamed and prayed for forgiveness, though he did not waver in his belief. During the night, Jesus and Mary his Mother, appeared,* asking, “Why are you in jail?” “Because of my love for you,” Nicholas replied. Jesus then gave the Book of the Gospels to Nicholas. Mary gave him an omophorion, so Nicholas wouldÂ again be dressed as a bishop. Now at peace, Nicholas studied the Scriptures for the rest of the night.

When the jailer came in the morning, he found the chains loose on the floor and Nicholas dressed in bishop’s robes, quietly reading the Scriptures. When Constantine was told of this, the emperor asked that Nicholas be freed. Nicholas was then fully reinstated as the Bishop of Myra.

Not that we’re advocating violence, but Nicholas was very clear that Arianism was a dangerous heresy and an affront to the true divine nature of Christ. This was the same of Ambrose, who’s feast day is today. He also knew that heresy in the church needed to be forcibly opposed. 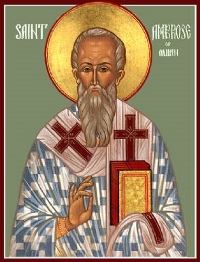 According to legend, Ambrose immediately and forcefully stopped Arianism in Milan. In his pursuit of the study of theology with Simplician, a presbyter of Rome he was to excel. Using his excellent knowledge of Greek, which was then rare in the West, to his advantage, he studied the Hebrew Bible and Greek authors like Philo, Origen, Athanasius, and Basil of Caesarea, with whom he was also exchanging letters. He applied this knowledge as preacher, concentrating especially on exegesis of the Old Testament, and his rhetorical abilities impressed Augustine of Hippo, who hitherto had thought poorly of Christian preachers.

In the confrontation with Arians, Ambrose sought to theologically refute their propositions, considered as heretical. The Arians appealed to many high level leaders and clergy in both the Western and Eastern empires. Although the western Emperor Gratian held orthodox belief in the Nicene creed, the younger Valentinian II, who became his colleague in the empire, adhered to the Arian creed. Ambrose did not sway the young prince’s position. In the East, Emperor Theodosius I likewise professed the Nicene creed; but there were many adherents of Arianism throughout his dominions, especially among the higher clergy.

In this contested state of religious opinion, two leaders of the Arians, bishops Palladius of Ratiaria and Secundianus of Singidunum, confident of numbers, prevailed upon Gratian to call a general council from all parts of the empire. This request appeared so equitable that he complied without hesitation. However, Ambrose feared the consequences and prevailed upon the emperor to have the matter determined by a council of the Western bishops. Accordingly, a synod composed of thirty-two bishops was held at Aquileia in the year 381. Ambrose was elected president and Palladius, being called upon to defend his opinions, declined. A vote was then taken, when Palladius and his associate Secundianus were deposed from the episcopal office.

Nevertheless, the increasing strength of the Arians proved a formidable task for Ambrose. In 385 or 386 the emperor and his mother Justina, along with a considerable number of clergy and laity, especially military, professed Arianism. They demanded two churches in Milan, one in the city (the basilica of the Apostles), the other in the suburbs (St Victor’s), to the Arians. Ambrose refused and was required to answer for his conduct before the council. He went, his eloquence in defence of the Church reportedly overawed the ministers of Emperor Valentinian, so he was permitted to retire without making the surrender of the churches. The day following, when he was performing divine service in the basilica, the prefect of the city came to persuade him to give up at least the Portian basilica in the suburbs. As he still continued obstinate, the court proceeded to violent measures: the officers of the household were commanded to prepare the Basilica and the Portian churches to celebrate divine service upon the arrival of the emperor and his mother at the ensuing festival of Easter.

If you demand my person, I am ready to submit: carry me to prison or to death, I will not resist; but I will never betray the church of Christ. I will not call upon the people to succour me; I will die at the foot of the altar rather than desert it. The tumult of the people I will not encourage: but God alone can appease it.

Ambrose also gave us some succinct Mariology, suitable since tomorrow is the celebration of the conception of the Virgin Mary. The Church of England formally rejects some of the Roman excesses in this area, particularly the idea that Mary herself was immaculately conceived, with no original sin in her. As a contrast. Ambrose of Milan gives us the real Biblical Mariology that is worth contemplating on. 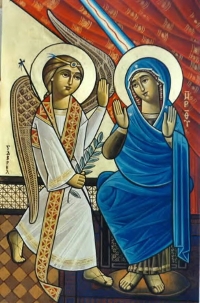 The powerful Mariology of Ambrose of Milan influenced contemporary Popes like Pope Damasus and Siricius and later, Pope Leo the Great. Central to Ambrose is the virginity of Mary and her role as Mother of God.

If we address Mary, we do so only in her role as Theotokos, the God-bearer and we do so on the understanding that we are not directly communicating but rather proclaiming the truth of who she bore. That very title, Theotokos, tells us that Mary is the bearer of God – Theotokos is a Christological statement and not a Mariological one. Mary is the carrier of salvation, but through no merit of her own – neither does she impart merit on her own behalf or others’. She stands with all the elect in front of the throne of God singing the praises of the Lamb. As Ambrose clearly states, only the one who was in the Temple can be worshipped.