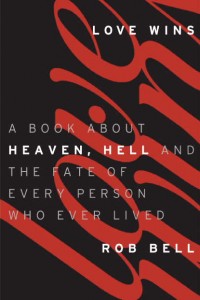 What is less obvious is how those who deny the future reality of Hell are much more likely to create hellish situations in the here and now. Rob Bell believes that hell is what we create when we reject God’s love. Amen. But I would want to add the absolutely critical proviso that this love of God (that is so rejected) must be defined as He defines it in the Bible, and not as we would wish it might be defined in our Big Rock Candy Mountain versions of Heaven. In the Bible, love is defined as Christ bearing the brunt of God’s wrath against our sin. “Herein is love, not that we loved God, but that he loved us, and sent his Son to be the propitiation for our sins” (1 Jn. 4:10). A denial of the wrath of God is therefore a denial of propitation (which is bearing the wrath of God), and this in its turn is a denial of love as biblically defined. This means that to deny the reality of Hell is to deny the love of God which saves us from the wrath of that Hell, and to deny the love of God is the first step in creating our own little microcosm of that Hell, which Rob Bell is engaged in doing. He is the pastor of Mars Hill Bible Church in Grand Rapids, and if he is right about what rejecting the love of God does (and he is), then it would appear that someone is trying to turn that place into Mars Hell.

Too often God’s love is defined the way some pop singer would define it when accepting her Grammy, and she is thanking her live-in boy toy for his “unconditional love.” Yeah, fine, but that’s not what it is.

Perhaps the definitive exegetical analysis comes from Kevin DeYoung. Spend some time reading the whole of his review.

One last general point about Bellâ€™s exegesis: Bell has a reputation for being brilliant and creative, and he probably is in certain spheres. But his use of Scripture exhibits neither characteristic. In fact, it is naÃ¯ve, literalistic biblicism. He flattens everything, either to make traditional theology sound ridiculously inconsistent or to make a massive point from one out-of-context verse. He makes no attempt to understand metaphors, genre, or imagery (either in Scripture or in his grandmotherâ€™s painting). He does not to try to harmonize anything that might rot his fresh take on the Bible. He loves Jewish background and context, but he shows very little familiarity with the actual storyline and the shape of the Old Testament. His style may be engaging to some, but look up the passages for yourself and then pick up a reputable study Bible or a basic commentary series. Youâ€™ll seriously question Bellâ€™s use of Scripture.

For the satirical response, Jim Hamilton is your man.

You thought God told Adam not to eat of that tree? You thought he said that in the day he ate of it, dying he would die? Even if the collector of the foreskins did create this world (Really? He did? We have confirmation of this? Somebody knows this? Without a doubt?), would that give him the right to take it upon himself to make restrictions on what people could do? Even if he were so presumptuous, who is to say that he would ever follow through on his word? After all, did Adam die that day? What will you say, that we are to take Adamâ€™s eventual death as proof that the one who claims omnipotence will do as he says? Would you consider that just? What does that mean, that this self-appointed judge is to be trusted?

Is there not a better way? Can we not imagine an arrangement we would prefer? Can we not invent a system that would be more palatable to people as sophisticated as ourselves? Would we not prefer to be led by one more like ourselves?

Should there not be a category for a ruler who, even if he said he was going to punish the opposition, would never actually do so? Would we have to conclude that such a magistrate were unworthy of trust? Could we not simply turn it into an interpretive issue? Would we not prefer one who would conduct the affairs of the universe more in the way that we ourselves would? Would we ourselves not alter the state of affairs in order to cast ourselves, for instance, in a better light? Would we not change the terms to our own advantage when necessary? Would not a ruler with such powers be preferable to one who would first presume to make rules and then be so impetuous as to enforce them?

Do I, Bill Z. Bull, not serve just the master I am describing?

Almost finally, a plea. If you must buy a copy of this book (if only to understand all the better what a heretical path Rob Bell has set out upon) then at least make that purchase count. Buy it here and help me continue to fund this little corner of orthodoxy. Alternatively, if you want a great book on eschatology, you can’t do much better then Simon Ponsonby’s And The Lamb Wins.

Last of all, let me know what you think.