For the grace of God has appeared, bringing salvation for all people, Â training us to renounce ungodliness and worldly passions, and to live self-controlled, upright, and godly lives in the present age, waiting for our blessed hope, the appearing of the glory of our great God and Saviour Jesus Christ, Â who gave himself for us to redeem us from all lawlessness and to purify for himself a people for his own possession who are zealous for good works.
Titus 2:11-14

The use of these words as a blessing at the end of this morning’s church service reminded me that, despite the best intentions of those who want us to all just live together happily in our disagreement, there is noÂ possibilityÂ of finding a middle ground. Take for example Giles Fraser’s words in this week’s Church Times, 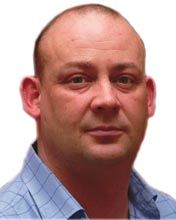 I repeat his answer, because it makes a fascinating comparison with the recently unearthed legal advice that the House of Bishops has commissioned on gay bishops (News, 27 May) â€” not least, that they ought to repent of any previous sexual activity (however long ago), before they could possibly be considered eligible.

This advice shows how much the Bishops have been straining every legal sinew to exclude openly gay bishops â€” even celibate ones â€” from their number. Do we really think that straight bishops have been chalÂ­lenged to repent of whatever they might have got up to at university, as it were? Of course not. And this double standard is a clear symptom of the fact that what is really going on here is prejudice, pure and simple.

The trouble is that, at the moment, a whole world of grammar is being invented with the express purpose of keeping gay people out of senior church positions. From the dreaded Anglican Covenant (whose purpose seems to be much the same) to this new advice, our Church is constructÂ­ing its ground rules specifically to exclude homosexuals. And there is another phrase for that: institutionÂ­alised homophobia.

Here’s the issue – the behaviour/orientation distinction that is articulated in Issues in Human Sexuality, in the 1998 Lambeth Resolution, again in the teaching document, “Some Issues in Human Sexuality”, in the House of Bishops’ Pastoral Statement on Civil Partnerships and, most recently, in the legal opinion given to the Crown Nominations Commission is rooted in an orthodox understanding of falleness and self-control that is epitomised in Biblical proclamations like the one given by Paul to Titus. Christians are called to “renounce ungodliness and worldly passions”, to “live self-controlled, upright, and godly lives in the present age” as we await the coming of Christ.

Of course, those who agree with Giles Fraser would argue that there is nothing ungodly or of aÂ worldlyÂ passion about the sexual Â expression of love between two people of the same sex. Â This of course is a matter of theological discourse, though increasingly many in the church find the arguments put forward to validate same-sex behaviour by revising our understandings of the key texts untenable. On top of this is the clear understanding that for some in the revisionist camp it does not matter what the Biblical texts say. I remember sitting in a meeting with one of the leading advocates for recognising and blessing same-sex relationships in the Church of England who, when asked whether he would change his position if it was proved definitively for him that the texts meant what the conservatives said they meant, replied, “No, I will continue advocating for same-sex relationships regardless, for I believe them to be holy”.

Here then is the key split. Though there are many in the revisionist camp who seek to make a Biblical case for same-sex relationships, many appeal to a higher authority, namely their own experience and theological discernment. Thus, the Church of England is “institutionally homophobic”, not because it misinterprets the Biblical texts but rather because the Biblical texts are themselves homophobic and do not express the true mind of God.

What might be useful in this discussion is to ask whether the legal opinion leaked from the Southwark discernments have any basis in Scripture? Might we find in the Pastoral Epistles the very admonitions on leadership that some find so unpalatable? Perhaps that is the subject for another blog post, but until then, let me lead you with a thought. When Giles complains that,

At the moment, a whole world of grammar is being invented with the express purpose of keeping gay people out of senior church positions. From the dreaded Anglican Covenant (whose purpose seems to be much the same) to this new advice, our Church is constructÂ­ing its ground rules specifically to exclude homosexuals.

is it not time that the CNC appointed a Bishop who, whilst openly gay, was not in a relationship and was publicly willing to endorse the traditional teaching on sexual expression? Might that not demonstrate that these restrictions on preferment have nothing to do with a hatred of homosexuals and rather a love of the Word, of discipleship and of the coming Christ as Paul points out to Titus.

If 13 bishops have already been outed,Â perhaps the “honesty” of those named might actually be the last thing the revisionists want, would actually be a shot in the foot for the liberal cause? That would be ironic n’est ce pas?