A Biblical Case for the Death Penalty

Much ruptures this morning in response to Paul Staines’ campaign to reintroduce the death penalty. Perhaps the most reasoned response is from Elizabeth Hunter of Theos. 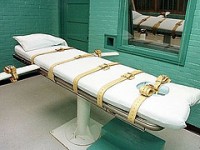 Perhaps it is because foreshortening a still-redeemable life seems a very dangerous undertaking, permissible only under conditions of the utmost wisdom, caution and objectivity. This campaign does not sound like a call for dispassionate justice, but retribution. Guido only wants to punish by death murderers of children and police. Is the life of an adult less valuable than that of a child? Does a killer of a traffic warden deserve death any less than that of a police woman? He might as well have added paedophiles to the list: these are people whose actions disgust us in a visceral way.

If Christian faith does anything, it should engender humility, an awareness of our own foolishness and fragility. Although in theory capital punishment may sometimes be the most just course of action, the level of knowledge required to make the decision to end a life is surely beyond us. When God commands us to not â€œrepay evil for evilâ€ and to leave revenge up to him, how can we be sure our actions are not equally evil, not motivated by a desire for revenge?

This is no utopian argument- awareness of our own ignorance should not paralyse us into inaction. On almost all issues we must make culture as we want it, fight for justice as we see it, aware that weâ€™ll never get it completely right.

However, in matters such as these we must recognise the limited nature of our justice system. Whether you imprison someone for life, or end it, the parents of the murdered child may have sated their (completely understandable) desire for retribution, but they are not repaid. In the case of this most irrevocable of decisions, humility should hold sway. Finally, as one who believes in an ultimate source of perfect justice, Iâ€™d prefer to leave it in those hands.

What strikes me as I read pieces like Elizabeth’s is that what is missing in the “Christian” response is an engagement with what the Bible actually says. Here’s Paul in Romans 13.

For rulers are not a terror to good conduct, but to bad. Would you have no fear of the one who is in authority? Then do what is good, and you will receive his approval, for he is God’s servant for your good. But if you do wrong, be afraid, for he does not bear the sword in vain. For he is the servant of God, an avenger who carries out God’s wrath on the wrongdoer.
Romans 13:3-4

Let me offer some brief thoughts to debate.

I preached on this issue last year (if you’re interested).

Update – Cranmer has some excellent analysis of the biblical, ecclesiastical and legal position here.

12 Comments on “A Biblical Case for the Death Penalty”