Shawn has a great post on the silent and the audible words of Jesus on homosexuality. 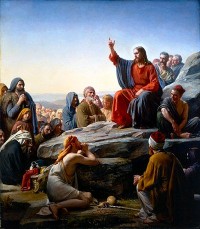 John 21:25Â states there were many things that Jesus said and did that no one recorded. Â True, He could have spoken in approval about same-sex relationships, but then again, He could have not. Â The question I keep coming up with is, if Jesus did give approval to gay relationships then why wasnâ€™t He more vocal about it? Â Christ never backed away from correcting wrong teaching. Â Take the Sermon on the Mount, for instance, where Jesus took time to clear up misconceptions about what the Old Testament said and how it was being taught by religious leaders. Â If He believed that same-sex relationships were now acceptable,Â wouldn’tÂ he have made such declarations? Â Especially when He talked about relationships and marriage (Mark 10:5-9).

The silence of Christ doesnâ€™t really help the pro-gay side on this issue; in fact, to me, it hurts their argument. Â Jesusâ€™ silence could be that He didnâ€™t have anything new to add to what was already said about homosexuality. Â Christ understood that such relationships â€“ even committed ones â€“ were wrong in Godâ€™s eyes. Â Even more, the Jewish people knew this. Â Was there reason to debate the issue if both sides believed it was wrong?

But Jesus didnâ€™t understand homosexuality like we understand it today, might be running through your head. Â Again, while the question is valid, donâ€™t forget one important detail: Jesus, being God, knows all things that He has created (Colossians 1:15-20). Â Unless you believe that JesusÂ was notÂ God, He shared the same characteristics as God because HeÂ isÂ God (omniscience,Â omnipotence, etc). Â And, if Jesus understood homosexuality as it is now, the other writers of the Bible fully understood the issue, too.

Even though Jesus was silent about gay couples, He didnâ€™t exclude them from salvation. Â Several times Jesus says that He came to save the world, to bring all of mankind to Himself, through His death and resurrection (John 3:16, Luke 19:10, John 10:14-16, John 12:32). Â All of mankind includes gays and lesbians. Â Jesus didnâ€™t make a distinction as to who can be saved and who canâ€™t, and neither should the Body of Christ. Â Every man, woman, and child deserves to hear and receive the message, love, redemption, and grace of Christ â€“Â EVERY ONE! Â The church doesnâ€™t decide who receives Jesus, or who gets into heaven, only God does.

The message of Jesus is universal, but itâ€™s a message that speaks to us specifically. Â God is after our hearts. Â He is bent on us walking in purity. Â The idols we hold dear to our hearts, the foolish things we wrap our lives around, theÂ discontentmentÂ we feel, the masks we wear each day, are all things Christ calls us to forsake in order to fully embrace the abundant life He offers us. Â This includes the struggles we deal with and the sins we live out justifiably.

One of the points Shawn makes is critical – given that homosexuality is such a big issue at the start of the 21st Century, surely God in his omnipotence would have made sure we today knew that same-sex relationships were actually good good and would not left us with a Bible that seems to the conclusion that all sex outside of marriage is sinful?

46 Comments on “Jesus on Homosexuality”