For reasons I’ve outlined before, I’m convinced that Chanukkah is the correct timing for the Annunciation. So whilst there is no compulsion for Christians to celebrate Jewish festivals, it’s not wrong to do so and it might actually be worthwhile if we use that opportunity to see how God used all of Scripture and his first Elect, Israel, to speak of Jesus.

So that said, here’s the best off the web to celebrate the festival of the miracle of the candles. And as John so perfectly puts it,

The hymn Ma’oz Tzur is sung during Chanukkah and it recalls the many ways YHWH has saved his people.

My refuge my rock of salvation! ‘Tis pleasant to sing to your praises.
Let our house of prayer be restored. And there we will offer You our thanks.
When You will have utterly silenced The loud-mouthed foe.
Then we will celebrate with song and psalm the altar’s dedication.

My soul was sated with misery, My strength was spent with grief.
They embittered my life with hardship, When enslaved under the rule ofÂ Egypt.
But God with his mighty power Brought out His treasured people;
WhileÂ Pharaoh’s host and followers Sank like a stone into the deep.

He brought me to His holy abode; Even there, I found no rest.
The oppressor came and exiled me, Because I served strange gods,
and drank poisonous wine. Yet scarcely had I gone into exile,
WhenÂ BabylonÂ fell andÂ ZerubabelÂ took charge; Within seventy years I was saved.

TheÂ Agagite, son of Hammedatha, Plotted to cut down the lofty fir tree;
But is proved a snare to him, And his insolence was silenced.
You raised the head of the Benjamite, But the enemy’s name You blotted out.
His numerous sonsand his household You hanged upon the gallows.

The Greeks gathered against me, in days of theÂ Hasmoneans.
They broke down the walls of my towers, And defiled all the oils.
But from the last remaining flask A miracle was wrought for the Jews.
Therefore the sages of the day ordained These eight for songs of praise.

O bare Your holy arm, And hasten the time of salvation.
Wreak vengeance upon the wicked nation , On behalf of your faithful servants.
For deliverance has too long been delayed; And the evil days are endless.
O thrust the enemy into the shadows of death, And set up for us the seven Shepherds. 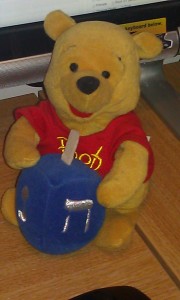 The final line is a reference to Micah 5:5, and it should be obvious to any Christian reading the whole of the chapter who Micah is referring to. The seven shepherds and eight princes are not literal men but rather symbolic of the nature of Messiah (see hereÂ for an example of this interpretation). The whole hymn is full of messianic and soteriological imagery – the liberation of the Hebrews from Egypt, the giving of a promised land, the way that YHWH continues to return to his people despite their rejection of him culminating in the great promise of Micah 5 of the coming forth from Bethlehem of the ruler of Israel who is of old, of ancient days.

Gosh, it’s almost as if someone planned it…

There you go. Now, if you don’t mind, Pooh Bear and I have some spinning to do.Â NesÂ GadolÂ Haya Sham (a great miracle happened there), and what a great precursor to the greatest miracle of all that happened, which we celebrate in just a few nights’ time.

25 Comments on “Chanukkah and Advent”