You knew that eventually we were going to come back to debunking some of the poor science claimed as “statistics” in the debate over homosexuality didn’t you? Here goes…

There is a report up on LifeSite News that claims that research in Australia looking at mental health figures for self-identified male and female homosexuals. LifeSite comments,

A study byÂ Drs. Paul and Kirk CameronÂ of the Family Research Institute in 2007 revealed that there is no difference in homosexual health risk depending on the level of tolerance in a particular environment.

The researchers found that homosexuals in the United States and Denmark – the latter of which is acknowledged to be highly tolerant of homosexuality – both die on average in their early 50â€™s, or in their 40â€™s if AIDS is the cause of death. The average age of death for all residents in either country ranges from the mid-to-upper-70s.

Lets look at these claims, that research shows high levels of mental health problems amongst homosexuals in countries where there is much greater tolerance and acceptance (which would debunk the idea that gay mental health issues are mainly to do with discrimination and intolerance). The paper cited to support this is this piece by Paul Cameron.

This paper is a poor piece of research. Let me say that again. It is poor. In order to build their database Cameron et al did two things. For the USA figures they went through the obituaries section of a famous gay newspaper and compared them to a secular newspaper. This means that this was not a random sample controlled for population, but rather a biased sample (biased in this sense towards the people whose obituaries were reported). All this data tells us is the different mean age at death between the these two samples – it does NOTÂ tell us anything about the wider “gay” and “straight” populations unlessÂ we have a method of resampling to extrapolate to these wider populations. Such a method is not provided.

The Norwegian and Danish figures are more interesting because they come from official government statistics. The claim is that the official figures show a mean age at death for men in a gay union of 20 years lower then those in a heterosexual union. However, as the original researchers noted at the time, the first cohort of married gay men (i.e. those who entered into marriage immediately after the law changed) included a large number of people with terminal illnesses.

Authors from the Family Research Institute,Â a US-based institution ï¬ghting to â€˜â€˜restore aÂ world . . . where homosexuality is not taughtÂ and accepted, but instead is discouraged andÂ rejected at every level,â€™â€™Â have produced aÂ series of reportsÂ in which they claim homosexuality is incompatible with full healthÂ and as dangerous to public health as drugÂ abuse, prostitution, and smoking.

Elementary textbooks in epidemiology warn against such undue comparisonsÂ between group averages because they lead toÂ seemingly common-sense yet seriously ï¬‚awedÂ conclusions.

Does that make sense? The average age of those entering a gay marriage was much younger then those entering a heterosexual marriage. This meant that in the limited time period of observation, if any of the gay men died they would be, on average, much younger then the “straight” cohort. The proper way to do this kind of research would be to normalise for age first, i.e. what you want to do is to compare to men aged the same (let’s say 35) who enter at the same time into a gay and straight marriage respectively and then see if there are differences in outcomes.

The original research does try to do this by looking at longer term outcomes. By removing the first year’s deaths (i.e. those people who entered a gay marriage and died within the first year – indicating that they were knowingly terminally ill at marriage), the dramatic figure of “Die 20 years younger” falls away. Here’s the table from the research. 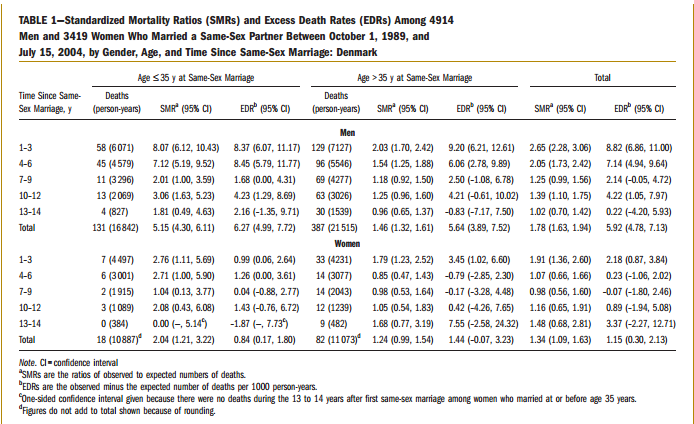 Here’s how to read the table. The “SMR” value is the ratio of observed to expected number of deaths. For example, if the value is 2 then the death rate is twice as high as expected in the general population. The “EDR” value is a measure of the change in average age of death (so an EDR of 5 would indicate that on average, people in this group die 5 years younger then expected).

You can see straight away that the “20 years younger” figure isÂ fallacious. The 1-3 years of gay marriage group has overall an EDR of 8.82, indicating that this group dies on average 9 years earlier then expected. By the time you get further down the table you start to get EDRs that are negligible. But there’s more to the table, because we also have the 95% confidence interval bands. These are the range of values within which we’re 95% confident that the real figure actually lies (because we’re dealing with samples of the population). Look at the EDR values – the 7-9 and 13-14 groups have an lower bound of below 0, indicating that we are not certain whether the average age at death might actually be higher then the “straight” comparison population.

The overall figure for EDR is 5.92 (so married gay men die on average 6 years before their straight counterparts). That’s not great, but it’s nowhere near the sensationalist 20 years figure put out by Cameron. But there’s more! The researchers looked at those gay men who married after the mid 90s (when HIV treatment became much more effective) and found that for this population the mortality rates were much more improved. As the abstract reports,

Yes, still slightly worse then the heterosexually partnered population, but nothing in the region of the “20 years shorter lifespan” figure cited by Cameron et al.

It’s not that the basic thesis (married gay men have a shorter lifespan then married straight men) is incorrect, it’s just that there are obvious reasons why the first tranche of married gay men in Denmark and Norway had remarkably short lifespans. Once you take this abnormal group out of the dataset (and once you deal with data from after the improvements in HIV care in the 90s), the figures become much more similar to heterosexual married men and certainly nothing like the “die 20 years younger” nonsense bandied around.

What the quoting of these figures by LifeSite and others also demonstrates is a basic lack of awareness of key statistical concepts around confidence intervals. The figures for gay men married for more than 6 years are approaching statistical insignificance, indicating that the real driving factor behind the mortality differences that we do see is less to do with homosexuality per se and more to do with the types of men who entered gay marriages in Denmark and Norway in their early years.

Although there is some basis for making the claim that gay men die younger then straight men, it behoves those who would seek to make such a claim to be honest with the evidence available and to point out the areas (i.e. gay men married for more than 6 years) where there is no difference with straight counterparts.